This year's 'Black Nazarene'procession was the fastest in event's history, organizers say 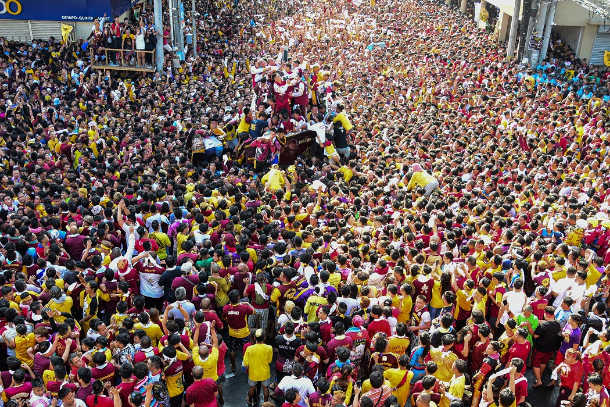 Devotees follow the carriage transporting the statue of the Black Nazarene during an annual religious procession in Manila on Jan. 9. (Photo by Maria Tan/AFP)

The annual religious procession to honor Manila's "Black Nazarene" on Jan. 9 left about 330 tons of garbage and hundreds of people injured.

Environment watchdog EcoWaste Coalition expressed disappointment over the trash left by the devotees. "The call for an environmentally-responsible expression of piety and devotion to the Black Nazarene again fell on deaf ears," said Jove Benosa, zero-waste campaigner of the group.

"We remain confident that the situation will improve in the coming years as more devotees listen and respond to the call for ecological conversion," he said. Meanwhile, at least 487 people were reported hurt during the procession, all minor injuries. Among them were a police officer and a soldier who were among the 14,000 security personnel providing security for the event. The Philippine Red Cross said its volunteers attended to 1,051 individuals, including 679 who had their blood pressure checked. About 291 patients who suffered from dizziness, shortness of breath, high blood pressure, abrasion, laceration, and sprains also received first aid. Unlike in past years when the procession lasted up to 22 hours, this year it only took 16 hours, due mostly to the help of police officers. Police barricades flanked the icon’s carriage, preventing many devotees from reaching it to touch the image, which made its passage faster. A line of policemen holding a rope also stood on either side of the streets where the procession passed, preventing many devotees from joining the crowd. "It's the fastest after seven years," said Father Douglas Badong, parochial vicar of the Minor Basilica of the Black Nazarene in Manila's Quiapo district. The priest said this year's procession was also the "most orderly procession so far." "We can attribute this to the combined efforts of the Church and the local government, the support of the mayor, the different government agencies, and the police," said Father Badong. The priest also explained the strict security procedures implemented by the authorities. "[The people] are not being prevented from going near the Nazarene," he said, adding that the phalanx of policemen was designed to make the procession route peaceful and orderly. He said he was glad that there were no fatalities or severe injuries during the event due to some changes that were introduced this year, such as a new route to quicken the pace of the procession. The "traslacion," or transfer" of the image of the "Black Nazarene" is a Philippine Catholic tradition to mark the anniversary of the transfer of the image of the suffering Jesus from a church in the old walled city of Manila to the present basilica outside the walls.