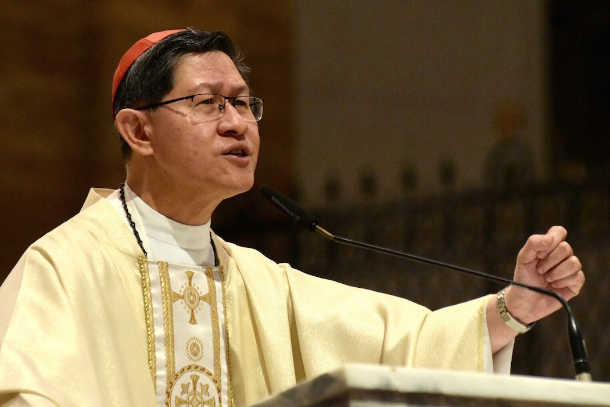 Cardinal Luis Antonio Tagle of Manila delivers a homily during the first of the nine-day traditional early morning Masses that usher in Christmas in the Philippines. (Photo by Angie de Silva)

The Catholic prelate of Manila, Cardinal Luis Antonio Tagle, has warned against abuse of power as he kicked off the Philippines' traditional nine-day early morning celebrations to usher in Christmas on Dec. 16.

The influential church leader took the opportunity to remind Filipinos against bullying and the use of "power to coerce others."

"The secret to happiness is still the same: do not belittle others," said the cardinal.

"Do not bully anyone. Do not use your power to disrespect others," said the prelate in his homily at Manila Cathedral where he celebrated the first of the nine early morning Masses.

He did not offer examples of bullying or abuse of power, although in recent weeks President Rodrigo Duterte has renewed verbal attacks against church leaders.

The president said bishops should be killed for criticizing his administration, adding that one bishop had even wished him dead.

"If you priests, bishops, if you ... wish me to die in a Mass, why will I not talk? Anyway, who will believe that you will go to heaven?" said Duterte in a speech on Dec. 14.

Duterte warned his critics, including Catholic Church leaders, not to use religion as a platform to attack him.

Despite his criticisms of Filipinos bishops, Duterte said he likes Pope Francis, saying he is "progressive."

"I believe in him. I salute him," said the president.

The traditional Misa de Gallo (Mass of the rooster) or Simbang Gabi (Evening Mass) kicks off official Christmas celebrations in the Philippines.

Thousands of Filipino Catholics flock to churches across the country during the dawn Masses, making it one of the most attended religious celebrations in the country.

Mexican and Spanish missioners introduced the devotion in the 16th century so farmers could return from predawn liturgies in time to finish their work during the busy December harvest season.