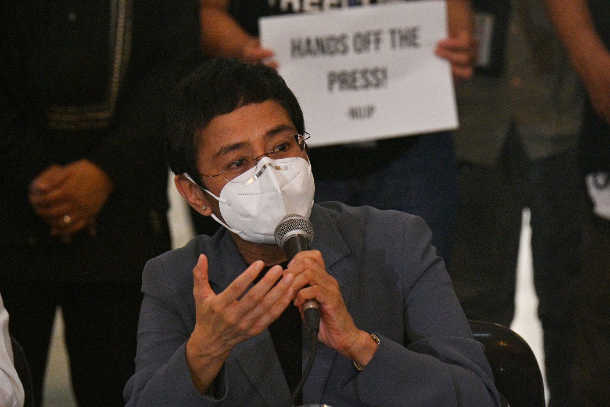 Journalist Maria Ressa speaks to the press after being convicted by a Manila court of cyber libel on June 15. (Photo: AFP)

A respected journalist and CEO of a Philippine-based news company faces up to six years in jail after being found guilty of libel in a case that is being seen as another blow to press freedom.

A Manila court found Maria Ressa, head of the Rappler news site and a former CNN investigative journalist, guilty of cyber libel for publishing a story accusing a Filipino-Chinese businessman of heinous crimes.

The court also convicted Reynaldo Santos, Jr., a writer for the news site, of the same crime. Both are appealing the ruling.

The pair had been accused of libel over a Rappler article first published in 2002 accusing businessman Wilfredo Keng of being a human trafficker, cigarette smuggler and murderer.

The story was republished in 2012 after Rappler refused a request from Keng’s lawyer to retract the allegations or publish an article in which the businessman tried to defend himself.

This prompted Keng’s lawyer to file cyber libel charges against Ressa, who was Time’s Person of the Year in 2018, and against Santos.

“The constitution guarantees freedom of expression and of the press. But this is a freedom burdened with responsibility, for even the Journalists’ Code of Ethics exhorts all journalists to ‘recognize the duty to air the other side and the duty to correct substantive errors promptly’,” the court said in its ruling.

The court also said Ressa was equally liable for the defamatory remarks as the editor of the news company.

Ressa, who is also a professor at Princeton University in the United States, said the decision was a blatant attack on press freedom with no other intent but to silence critics of Philippine President Rodrigo Duterte.

“We are meant to be a cautionary tale. We are meant to make you afraid. I appeal again, don’t be afraid because if you don’t use your rights, you will lose them,” said Ressa in an interview after the verdict and sentencing.

“The case is very dubious. How can Maria Ressa and Rey Santos be convicted of a crime committed on May 29, 2012, based on a law that was passed on Sept. 12, 2012? If this is jurisprudence now, then it is truly scary,” Bishop Pabillo said in a statement.

Bishop Pablo Virgilio David of Kalookan also described Ressa’s conviction as a “dark and gloomy day” for the Filipino people.

“This is a very sad day for our country’s press freedom, which is an essential component of a functional democracy in any country,” Bishop David said on social media.

Ressa and Rappler have previously been targets of attack by Duterte for being staunch critics of his war on illegal drugs.

In 2018, Duterte denounced Rappler as a “fake news outlet” and threatened to shut it down. A few months later, the government revoked Rappler’s license due to foreign ownership issues.

Ressa and Rappler have also faced multiple tax evasion cases. The journalist was arrested twice because of tax charges.

“I’m being treated like a criminal when my only crime is to be an independent journalist,” Ressa told reporters.