Fatalities this year have already matched the 2012 total 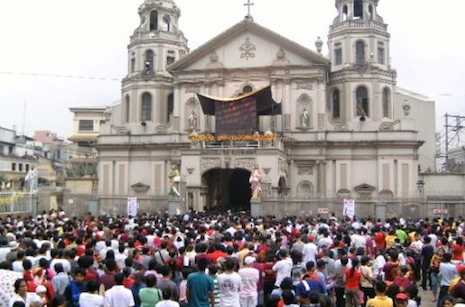 Manila’s Quiapo church with its famous Black Nazarene became the latest target of the government’s fight against a dengue fever outbreak today as teams of health workers sprayed down the basilica.

After more than 4,000 cases of the mosquito-borne disease and 10 deaths in Manila alone in the first half of this year, the Health Department said it was offering anti-dengue protection directly to devotees for the first time as a precautionary measure.

“We will not stop until dengue is eliminated,” said Eduardo Janairo, head of Manila’s health office.

With its Black Nazarene, a source of healing according to believers, Quaipo is “one of the most heavily visited churches in Metro Manila,” said Monsignor Jose Clemente Ignacio, parish priest of Quiapo district.

“[It is] prudent to protect devotees from mosquito bites,” he added.

Health officials said that dengue fatalities so far this year have already reached the total number recorded in 2012 with more than 42,000 cases and 193 deaths reported across the country.

As part of its campaign, to try to bring down infection rates, the health department has mapped out high-risk areas, organizing teams to target key areas as it tries to increase communication on dengue across the Philippines.

"Dengue needs urgent action and we need it now. In the absence of the usual cures and vaccines, we have to rely on the basics of early prevention and community action," Health Secretary Enrique Ona said last week.