Manila church services 'may be suspended' due to bomb threats 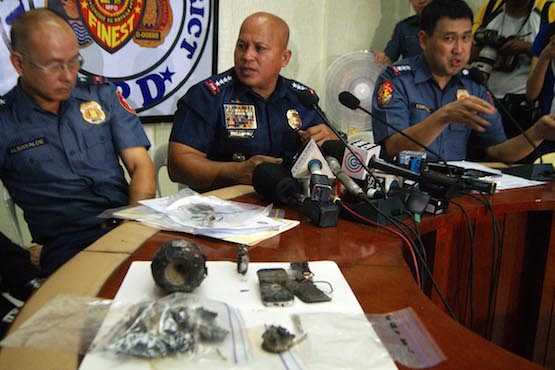 Philippine National Police chief Ronald dela Rosa (center) presents to the media components of a bomb that was found outside the American embassy in Manila on Nov. 28. (Photo by Mike Taboy)

Masses and other liturgical services in the Philippine capital Manila would be suspended if there is an imminent threat to people's safety, a Philippine bishops' conference official said Nov. 29.

"The church, for practical purposes, will be more than willing to suspend any liturgical activity if there are threats to the safety of churchgoers," said Father Jerome Secillano of the conference's public affairs committee.

His comment came a day after a bomb was found outside the American embassy in Manila.

The presidential palace has ordered "heightened security measures" in public areas in and around the capital after the discovery of the bomb on Nov. 28.

Andanar, however, said the bomb discovery "should not be a cause for alarm," adding that police are "on top of the situation and shall beef up security measures in public places."

Manila police chief Joel Coronel said that based on initial investigations, the bomb was similar to one that exploded at a night market in Davao City in September.

The bombing prompted President Rodrigo Duterte to declare a "state of lawless violence" in the Philippines.

Father Secillano said churchgoers are encouraged to report any "suspicious-looking individuals," adding that parish priests may request "police and military forces to secure their parishes."

The priest said any move to ensure the security and safety of the public should be welcomed although he warned against the suspension of the writ of habeas corpus.

The writ of habeas corpus is a legal course against arbitrary arrest and illegal detention by the government. Such a petition directs the government to present a person before the court and justify his detention.

Duterte earlier warned that he might take a "more drastic action" against lawless elements by suspending habeas corpus.

"To go as far as suspending any legal remedy aimed at protecting the rights of our citizens, like the writ of habeas corpus, must be opposed," said Father Secillano.

"What should be of paramount importance is for our government to neutralize these lawless elements and make them pay for terrorizing our people," added the priest.

On Nov. 27, a bomb exploded outside a Catholic church in the town of Esperanza in the southern Philippines.

The explosion occurred as people were leaving the church after attending a morning Mass to mark the first Sunday of Advent.

Police checkpoints have been set up around Manila to prevent possible attacks by members of the Maute group, which has claimed allegiance to the so-called Islamic State group.

The Philippine National Police announced that the group might be behind the foiled bombing outside the American embassy.

On Nov. 29, sporadic fighting between government troops and members of the Maute group continued in Butig town, Lanao del Sur province in the southern Philippines.

The military said the fighting has left at least 19 members of the group dead.