A soldier takes part in a communion service with wrapped sachets of ‘holy host’ or communion bread at a checkpoint in Manila as the city implements an enhanced community quarantine to fight against the spread of the coronavirus. (Photo: Maria Tan/AFP)

Catholic schools opened their doors yesterday to give shelter to healthcare workers and the homeless in the Philippine capital Manila amid the Covid-19 pandemic.

Bishop Broderick Pabillo, the apostolic administrator of Manila Archdiocese, thanked the parents and administrators who agreed to “open their doors.”

“We laud this gesture of our school directors to provide quarters for the homeless, street dwellers and health workers where they can be safe and secure,” the prelate said.

The bishop added that volunteers will “provide for the basic needs of those who are taking shelter.” He also assured parents that the archdiocese will help ensure that the schools will be Covid-free before classes resume.

De La Salle University-Manila also announced on social media that it is providing shelter to around 100 beggars and street children.

The university, together with the Congregation of the Society of the Divine Word, is giving food packs and toiletries to those who are on campus. The university is also welcoming donations from its alumni and the public.

Meanwhile, Cardinal Luis Antonio Tagle, prefect of the Congregation for the Evangelization of Peoples, called on fellow Catholics to think “not only of ourselves” but of others.

In his reflection “Emergencies and Charity,” Cardinal Tagle said that a “pandemic virus must produce a pandemic ‘contagion’ of charity.”

“During emergencies, we instantly think first of ourselves, our families and the people close to us. We will do anything within our means to protect them. While this reaction is basically good, we should be careful so that we do not end up thinking only of ourselves,” wrote the former archbishop of Manila. 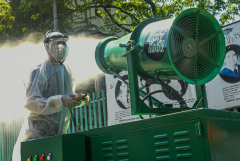 He added that fear should not make people blind to the needs of others. One cannot wash their hands of the “responsibility towards the poor and the homeless.”

As of March 26, the Philippines had recorded 707 Covid-19 cases with 45 deaths, according to government figures.