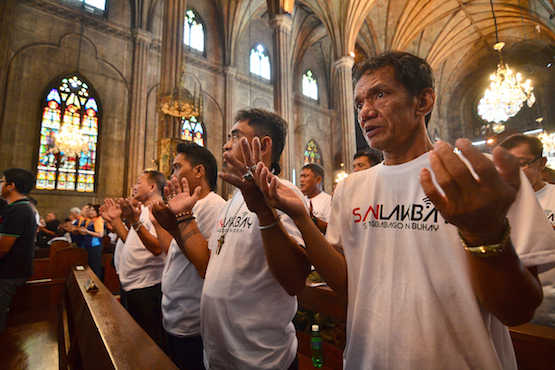 Former drug dependents attend a Mass at the end of a six-month rehabilitation program on Oct. 21. (Photo by Maria Tan)

A community-based drug rehabilitation program run by Manila Archdiocese has received a boost from Pope Francis a year after it's launch.

Cardinal Luis Antonio Tagle of Manila said the pontiff was excited about the program, called Sanlakbay (One Journey), which has so far helped more than 100 drug dependents.

The Manila prelate told the pope about the community initiative during a recent audience.

"I told him about Sanlakbay and when he heard about it, with eyes sparkling, he said, 'that's the way to go,'" Cardinal Tagle revealed during the program’s first anniversary celebration on Oct. 21.

"He said: continue, continue that," the Manila prelate said, quoting the pontiff.

Sanlakbay is a parish-based program that stresses the importance of the community in helping drug dependents. It involves spiritual formation, counseling, livelihood projects, skills formation training, as well as sports, culture and the arts.

The program was launched in October last year as a response to drug-related killings following the government's declaration of an "all-out war" against illegal drugs.

A year into President Rodrigo Duterte's war against drugs, close to 12,000 suspected drug dependents and peddlers have been reportedly killed.

Philippine authorities, however, said at least 3,900 of those who died were killed during "legitimate police operations." The other killings were either blamed on unknown assassins or were classified as "deaths under investigation."

Cardinal Tagle said drug dependents should not be reduced to "mere statistics."

"They are not numbers, they are human beings. They have a soul, rights, dreams, and families," said the prelate during his homily at the Mass marking Sanlakbay's first anniversary.

The cardinal said he would provide Pope Francis with an update about the program when they meet in November.

"I will inform him that Sanlakbay just celebrated its anniversary," he told drug dependents who attended the Mass at the end of their six-month rehabilitation program.

In his homily, the cardinal emphasized the "importance of every person" and assured drug dependents that "all of you will be loved wholeheartedly ... not because we are just putting up with you."

"You are important to the whole Filipino people," he added.

The cardinal also addressed officers of the Philippine National Police at the Mass, telling them that "there is hope" and expressing his wish that those who survive the drug war "will not be killed."

Early this month, Duterte announced that he has withdrawn the police from the government's anti-narcotics war after they were accused of human rights abuses.

A week later, however, the president said he would consider bringing the police back to run the drug war if there is a spike in drug-related crimes.

Cardinal Tagle, meanwhile, appealed to the public to continue to accompany drug dependents "in their journey to a new life ... because temptation is always there."