Bishops criticize lack of consultation, say churches in Philippine capital 'will be open but restricted to 10 percent capacity 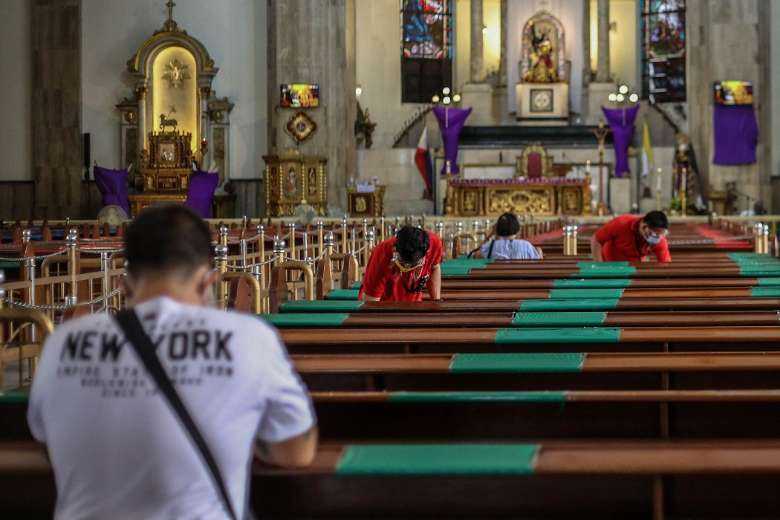 Residents pray as workers disinfect pews at a church in Manila on March 23, 2021, after authorities implemented stricter social distancing protocols prohibiting religious gatherings due to an increase of new Covid-19 infections in the Philippine capital. (Photo: Jam Sta Rosa/AFP)

Manila Archdiocese has issued a pastoral letter saying it will defy a government ban on religious services in churches in the Philippine capital and nearby provinces following a recent surge in coronavirus cases.

However, it said it would tighten limits on the number of people allowed in a church for Mass and other services.

“We will not conduct any religious activities outside of our churches … but within our churches starting March 24, we will have our religious worship within 10% of our maximum church capacity,” Manila apostolic administrator Bishop Broderick Pabillo said in the letter.

Manila Archdiocese’s decision to hold religious services came in response to a ban or limits on religious activities by Philippine health authorities, which would mean churches would be closed to large gatherings during Holy Week.

The Inter-Agency Task Force on Emerging Diseases (IATF) announced on March 20 that religious gatherings were prohibited from March 22 until April 4 while the holding of weddings, baptisms, and funeral services would be limited.

“Let the worshippers be spread out within our churches, using the health protocols that we have been so consistently implementing,” he said.

Bishop Pabillo has called on churchgoers to defy the government’s anti-Covid protocols calling them “wrong” because church authorities were not consulted.

“We should not follow such guidelines imposed without consultations, which somehow breaches the principle of the separation of Church and state,” Bishop Pabillo told Radio Veritas.

“In spite of our adherence to strict protocols, you lock down our churches during the holiest time of the year and allow 70 percent capacity in fitness centers and fifty percent in establishments for personal care services, including spas? All right. May God have mercy on your souls,” he said in a social media post.

He said he had expected that at least twenty to thirty percent of the maximum seating capacity of churches would be allowed instead of “totally” banning religious gatherings during Holy Week.

“But no, they would not even allow us to celebrate Easter on April 4,” he said.

The government should have spoken to Church authorities before banning religious gatherings during the Holy Week, the prelate said.

“It [the ban] came as an instant order and with not even a modicum of dialogue... Why forbid our religious gatherings? Isn’t this a violation of religious freedom?” he said.

Government spokesman Harry Roque, however, warned the bishops that Catholics must follow the guidelines set by the task force.

“Defiance of an IATF resolution is not covered by the separation of Church and state. What is covered is the freedom to believe and the freedom not to endorse a religion,” he said on national television.

“In the exercise of the state’s police powers, we can order the churches closed. I hope we don’t come to that,” Roque told the bishops.