Relic of the saint, still in liquid form, was a gift from the pope's former secretary, Cardinal Stanislaw Dziwisw 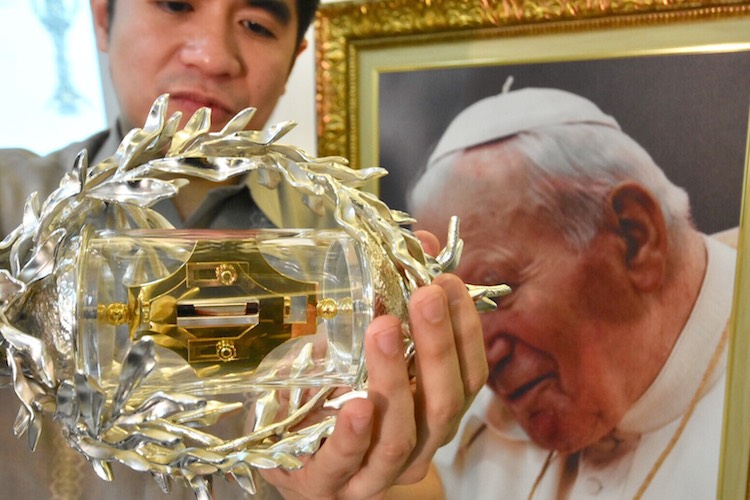 Father Reggie Malecdem, rector of Manila Cathedral, holds the relic of Saint John Paul II, a vial of containing the blood of the late pope. (Photo by Angie de Silva)

The Archdiocese of Manila will be the custodian of a precious relic of St. Pope John Paul II — his blood, which will be the object of veneration in the Philippine capital starting on April 7.

"This precious gift ... is truly a source of consolation and help especially for those who are suffering physical illnesses," read a statement from Manila Cathedral.

Relics have always received particular veneration and attention in the Catholic Church because of the belief that the bodies of saints have become instruments of their holiness.

"Let those who have special intentions and petitions come in veneration and prayer," read the statement.

Father Reggie Malecdem, rector of Manila Cathedral, said it was a "great honor" for the church to be the custodian of the relic.

"We did not expect that Cardinal Dziwisz would send us still liquified blood," said the priest during a media briefing in Manila on April 5.

A Poland-based Filipino nun brought the relic to Manila on Dec. 11, 2017. It is the first ever blood relic of a saint still in liquid form in the Philippines.

Towards the end of the late pope's life, doctors extracted blood from him in case there was a need for an emergency transfusion.

The blood is still in liquid form because of an anti-coagulant substance present in the test tubes at the moment of extraction.

There are only seven vials of liquid blood belonging to the saint enshrined in different churches around the world.

The relic is placed inside a reliquary, which is the exact copy of the one that was presented during the pope's beatification and canonization.

"Let us come together as we welcome home the presence of our beloved Pope John Paul II and receive the graces and miracles through his powerful intercession," said the priest.

Pope John Paul II, who served as pontiff from 1978 to 2005, celebrated Mass at the cathedral during his five-day visit to the Philippines in February 1981.

Two months later, he declared the cathedral a minor basilica.

In January 1995, he again visited Manila for World Youth Day, which was attended by an estimated four million people.