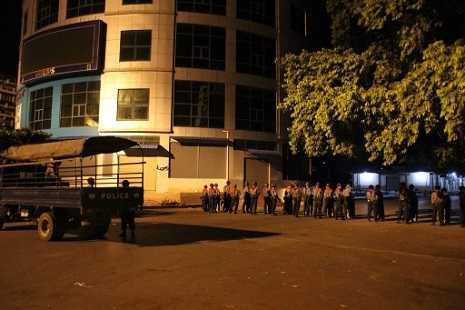 One Buddhist and one Muslim were killed as religious rioting erupted in Mandalay for a second night in the early hours of Thursday morning.

“We are investigating more suspects with our records, then we will take action,” he said.

Images of the injured body of 51-year-old Muslim Soe Min spread on social media after he was reportedly attacked by a mob on the way to pray at a mosque early on Thursday morning. He later died of his wounds.

The Buddhist victim was named as 36-year-old Tun Tun, a volunteer for a free funeral service in Mandalay. He and a friend were riding on motorcycles when they were reportedly attacked by a Muslim mob around midnight.

Funerals for both men were held later in Thursday. Arrests made by police were on charges of public misconduct and destroying public property, and were therefore not directly related to the killings.

“Our first priority is to create stability in Mandalay, then our second set of priorities are to arrest the people involved in the mob attacks, and then take action regardless of religion and race,” he said after the meeting.

Mandalay has become increasingly tense since Tuesday evening after allegations that two Muslim teashops had raped a Buddhist girl circulated on social media, including on the Facebook page of hardline Buddhist monk Wirathu.

When Buddhist mobs armed with sticks and knives began to descend on the teashop on Tuesday evening, police fired rubber bullets as warning shots.

Prominent Buddhist monk Karwiya said he and others tried to calm people on the streets as they visited mosques since Tuesday night, but violence erupted after they left.

“Local authorities have the main responsibility to restore order, and when they didn’t take enough action, mobs dared to attack continuously,” he said.

Muslim residents have closed shops and boarded up their homes in Mandalay amid fears over attacks similar to those witnessed in different cities across the country since sectarian violence erupted between Buddhists and minority Muslim Rohingyas in June 2012.