Gay rights and displaying the rainbow flag have been simmering issues in Qatar, where homosexuality is illegal 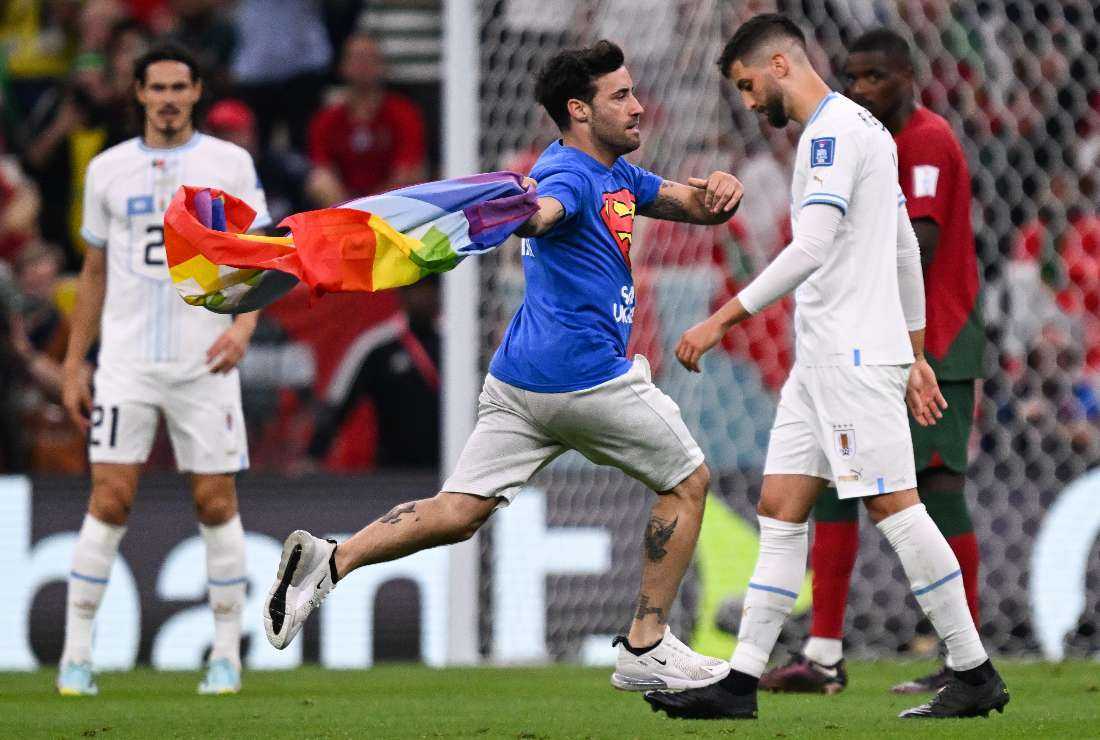 A man invades the pitch holding a LGBT flag as he wears a t-shirt reading "Respect for Iranian woman" and "Save Ukraine" during the Qatar World Cup football match between Portugal and Uruguay at the Lusail Stadium in Lusail, north of Doha on Nov. 28. (Photo: AFP)

A man carrying a rainbow flag and wearing a T-shirt with the words "Respect for Iranian Woman" on the back invaded the pitch during a match at the Qatar World Cup on Monday.

The man was on the field for about 30 seconds during the second half of the game between Portugal and Uruguay before being tackled and escorted off by security.

He also had the words "Save Ukraine" on the front of his T-shirt, in reference to the war-torn nation.

"We know what has happened around this World Cup... It's a normal thing to happen," said Portugal player Ruben Neves.

"Of course, we are all with them as well. With Iran as well, with the Iranian women. So I hope it doesn't happen, anything to the boy, because we understand his message, and I think all the world understands it as well."

The protestor was identified as Italian Mario Ferri by Italian press agency AGI.

He has staged similar protests before, including at the 2014 World Cup in Brazil, where he raised the issue of children living in poverty.

Gay rights and the use of the rainbow flag have been a simmering issue at the World Cup in Qatar, where homosexuality is illegal.

Captains of seven European teams had planned to wear rainbow-themed anti-discrimination armbands during the tournament as part of a campaign for diversity.

But they backed down over the threat of disciplinary action from football's governing body FIFA, including yellow cards.

Britain's sports minister Stuart Andrew will wear the armband when he attends England's clash with Wales on Tuesday.

Fans complained earlier in the tournament that they had been told to remove items of clothing with the rainbow on them.

-White House reaction
Monday's on-pitch protest was addressed by White House Press Secretary Karine Jean-Pierre, speaking on the eve of a politically charged match between the USA and Iran in Qatar.

"We are concerned over the potential treatment of LGBTQ+ spectators and athletes," she said.

"We urge the state of Qatar and all Qataris to fully realise the emir's message and that is to truly recognise, to welcome everyone to the Cup, the World Cup."

FIFA said it had no comment to make at this stage.

Iran's team has separately been in the spotlight because of anti-government protests at home.

The Iranian team did not sing the national anthem before their first game against England in an apparent gesture of solidarity with the protesters.

Iran has been shaken by more than two months of nationwide demonstrations since the death of 22-year-old Mahsa Amini in morality police custody on September 16.

Amini, a 22-year-old Iranian of Kurdish origin, died three days after her arrest in Tehran over an alleged breach of the dress code for women, which includes the mandatory hijab headscarf.

The Norway-based Iran Human Rights group says more than 410 people have been killed in a government crackdown.