Man sets himself on fire near Japan PM's office

Police declined to confirm, but a spokesman said an individual with burns had been found near government property 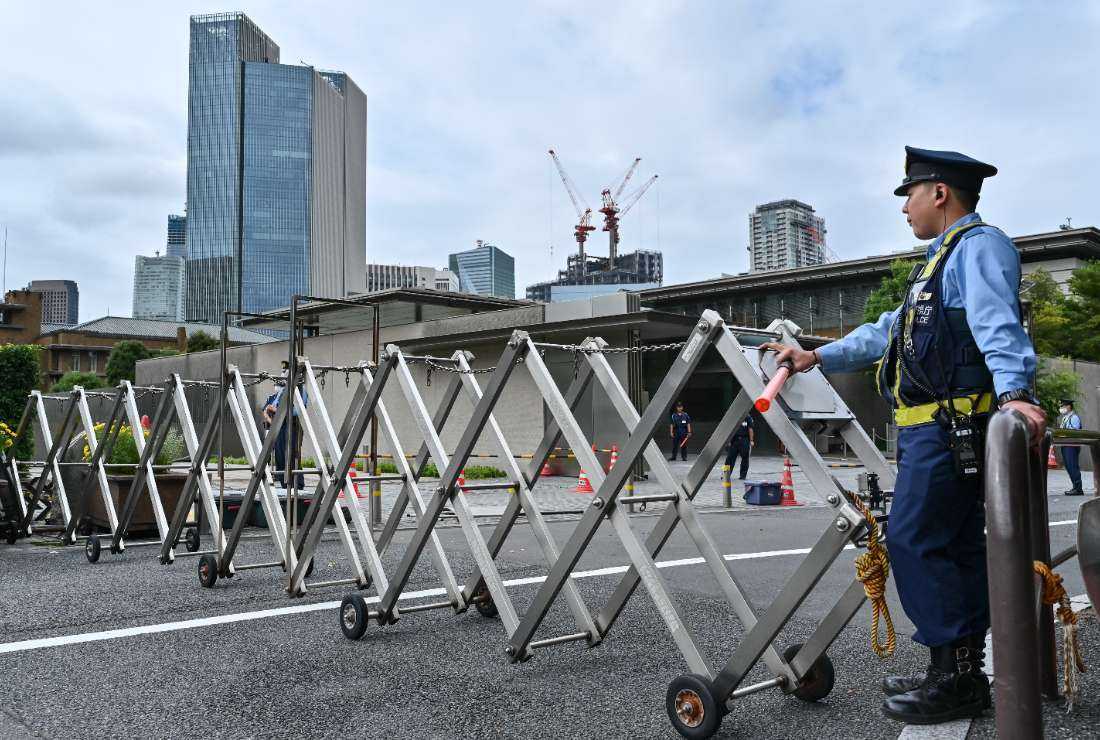 Police stand guard at the entrance to the prime minister's official residence in Tokyo on Sept. 21. (Photo: AFP)

A man set himself on fire near the Japanese prime minister's office on Wednesday after expressing opposition to a state funeral for assassinated ex-premier Shinzo Abe, local media reported.

Police declined to confirm the incident, but the government said an individual with burns had been found near government property.

"We are aware that a man with burns was found by a police officer at 7:00 am (2200 GMT) this morning at an intersection below the cabinet office," top government spokesman Hirokazu Matsuno said.

"But details are currently being examined by police," he added, declining to answer further questions on the incident.

Local media said the man was taken to hospital and was conscious.

TV Asahi said he told police he was opposed to the planned ceremony for Abe.

According to the television station, a police officer who tried to extinguish the fire was injured in the process.

Jiji news agency said handwritten notes found near the man said he was "staunchly opposed" to the state funeral.

The man was believed to be in his 70s and told police he had doused himself in oil, the agency added.

By mid-morning, the only sign of the incident was a scorched patch of grass and bush, with police and media nearby.

Abe, Japan's longest-serving prime minister, was shot dead on July 8 while campaigning, and a publicly funded state funeral honouring him will be held on September 27.

State funerals are rare in Japan, and the decision has been controversial. Recent polls show more than half of the public is opposed to the idea.

Abe was Japan's best-known politician and remained a prominent public figure after resigning for health reasons in 2020.

He was campaigning for ruling-party candidates in upper-house elections in the Nara region when he was shot by a man who allegedly believed the former leader had ties to the Unification Church.

Abe was far from universally popular, and many opposed his hawkish nationalist views or were angered by persistent allegations of cronyism.

The ceremony for Abe is expected to cost at least 1.7 billion yen ($12 million.)

Kishida, who is currently in New York to address the UN General Assembly, has defended the plan, insisting Abe's record-breaking tenure and international standing mean he merits the ceremony.

The prime minister's approval ratings have taken a hit over the decision, as well as a controversy over ties between politicians and the Unification Church.

The church, whose members are sometimes colloquially called the "Moonies" after Korean founder Sun Myung Moon, has been accused of pressuring believers to make sometimes ruinous donations -- accusations it denies.

Tetsuya Yamagami, the man accused of shooting Abe, reportedly resented the church over his mother's membership and hefty donations that left his family bankrupt.

While Abe was not a member of the church, he addressed affiliated groups, and his death caused renewed scrutiny of the sect and its political connections.

An investigation by Kishida's ruling Liberal Democratic Party found that around half its lawmakers had ties to the sect.

He has pledged that the party will cut all links to the church, which has denied any wrongdoing.

Abe's state funeral will be held at Tokyo's Budokan, a large venue for concerts and sporting events.

World leaders, including US Vice President Kamala Harris and Australian Prime Minister Anthony Albanese, are among those expected to attend.