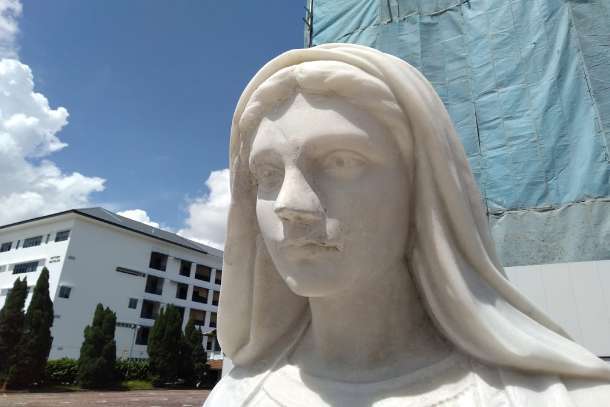 Police in Singapore have arrested a man for defacing a statue of the Virgin Mary at a Catholic church, local media reported.

Race Koh Jun Xian, 37, was charged with criminal trespass and defiling a place of worship with intent to insult a religion, police said on Nov. 20.

Court documents say the Singaporean man climbed over a fence onto the grounds of the Church of the Nativity of the Blessed Virgin Mary on Upper Serangoon Road in Hougang in the northeast of Singapore island on Nov. 12.

He then allegedly used Blu-tack to stick marbles to the eyes of the statue.

The incident occurred while the church was closed to the public due to ongoing renovation work.

Koh reportedly told the court that he didn’t defile the statue intentionally but wanted to pray before Mary and “beautify her.”

Under Singaporean law, Koh could face three months in jail and a fine of up to 1,500 Singapore dollars (US$1,116) or both on the trespass charge. For defiling a place of worship, he could face up to five years in prison.

“The police do not condone acts that insult religious harmony at places of worship of any class in Singapore and perpetrators will be dealt with sternly in accordance with the law,” Channel News Asia reported a police spokesman as saying.

Koh was remanded to a mental health institution for a psychological assessment.

The church has requested people exercise discretion in commenting on the matter and refrain from speculation as investigations continue. “Many have heard about Our Lady’s statue, and we have received many well wishes and enquiries. We would like to thank everyone for your prayers and considerations. We would also like to remind everyone that as investigations are still ongoing, do exercise discretion in your comments and please refrain from speculation and spreading any unofficial information," a statement said.

The Marian statue was presented to the church by Sultan Ibrahim of Johor more than 70 years ago.

Catholics account for more than 157,000 out of Singapore’s population of over 5.8 million.