Deforestation, mining and plantations are damaging the environment in areas hit by floods and landslides A rescue team continues its search for survivors in Brebes district's Pasir Panjang village after it was hit by a deadly landslide on Feb. 22. (Photo courtesy of Eko Andalas)

Trauma still haunts Elisabeth Elsa Handayani. She feels weak at the knees every time she hears the wailing sound of the siren used by a rescue team to tell villagers to stay alert.

After days of heavy rainfall caused the Cisanggarung River to overflow and its embankment to collapse, a flash flood hit Losari Lor village in Brebes district, Central Java, where her two-story house is located, on Feb. 23.

"Floodwater came suddenly around 12.30pm. I rushed to save my belongings but could save only the refrigerator and washing machine. The rest were broken. I was just with my two children as my husband was away," Handayani, 35, told ucanews.com.

"My neighbors joined me upstairs as the floodwater was as high as an adult's chest and continued to rise. Around 3pm, the rescue team told us to leave my house."

Until the evening of Feb. 27, knee-deep floodwater inundated the houses of all 15 families in the village.

However, Handayani and some villagers had already returned to their homes. "I just want to keep my belongings from any looting," she said.

It was the first time Handayani from St. Mary of Fatima Parish had experienced such a traumatic disaster after living in the village for 10 years.

Losari Lor was among 27 villages hit by flooding. It was the worst-affected village in floods that claimed three lives.

A day before the flooding, the district's Pasir Panjang village, inhabited by 85 families, was hit by a landslide that started in surrounding hills that are part of a forestry plantation. The landslide was one kilometer long and had an estimated volume of 1.5 million cubic meters. At least 11 people were killed, seven injured and 245 fled their homes.

Rescuers stopped their search for seven missing people on Feb. 28 following an agreement with their families.

The flooding and landslide were among 438 disasters that occurred in Indonesia between January and February this year, according to the National Disaster Mitigation Agency, known as BNPB. The deadliest incidents were landslides, which were responsible for 46 of the 60 deaths.

Social Affairs Minister Idrus Marham, who visited Pasir Panjang village on Feb. 27, said the government will allocate initial fund of 1.6 billion rupiah (about US$117,000) to help those affected by the flooding and landslide in Brebes district.

"We will soon send medicines and more packages of necessities," he said. 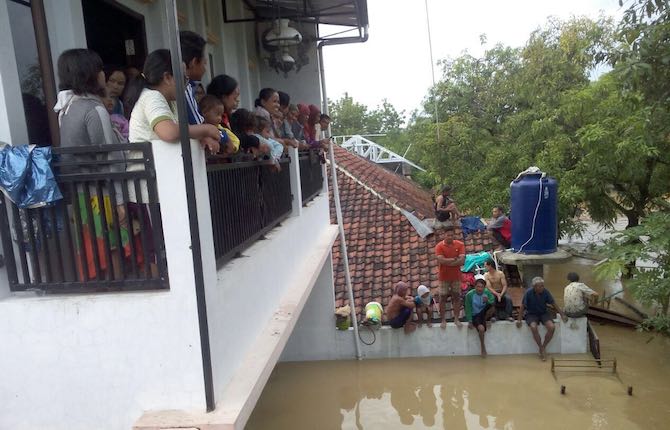 Villagers take refuge on the second floor of a house in Losari Lor village after a flash flood on Feb. 23. (Photo courtesy of Father Paulus Bambang Widyatmoko)

It's believed that seasonal rains cause widespread flooding and landslides in Indonesia, where 40.9 million people, or 17 percent of the population, live in landslide-prone areas.

However, Franciscan Father Yohanes Kristoforus Tara, coordinator of the Justice, Peace and Integrity of Creation office in Timor, blamed environmental destruction for the disasters.

"We cannot just blame nature. We must see clearly why the disasters occur. There is forest exploitation," he said, urging the government to focus more on development with an ecological perspective instead of an economic one.

The priest also called on religious leaders to continue urging the government to protect the environment "because all religions have a similar view of environmental protection."

According to the 2018 Environmental Outlook report of the Jakarta-based Indonesian Forum for the Environment, 13 provinces face problems with industrial forest plantations, mining and reclamation. About 159 million hectares out of 545 million hectares of the country's land are used for extractive industries.

Zenzi Suhadi, the forum's head of research and environmental law, blamed a sharp decrease in the number of water absorption areas for flooding that hit several regions.

"On Java Island, the government's failure in managing forests causes flooding. On other islands, flooding is caused by mining activities and palm oil plantations, which destroy water absorption areas," he said.

"It's true that environmental destruction as well as the government's policies and regulations remain the main cause of such widespread disasters."

BNPB spokesman Sutopo Purwo Nugroho said the number of landslides and casualties had continued to increase after years of deforestation and environmental degradation.

He told reporters that the rate of deforestation stands at 750,000 to one million hectares per year, greater than the government's ability to rehabilitate forests at 250,000 hectares per year.