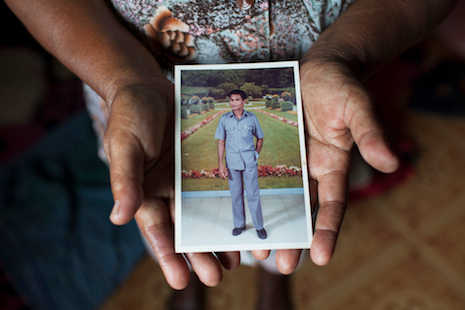 Jermina Leatemia Leihitu holds a photograph of her husband Izaak Leatemia, a retired civil servant who was arrested on April 25 for taking part in a rally to mark the anniversary of the Republic of South Maluku’s declaration of independence from Indonesia (Photo by Will Baxter)

By Will Baxter and ucanews.com reporters, Ambon

It all started with a prayer and a bit of jazz.

On the morning of April 25, about 20 South Moluccan nationalists gathered in Maluku province’s capital, Ambon, where they’d planned to hold a peaceful “long march” to mark the anniversary of the Republic of South Maluku’s (RMS) declaration of independence from Indonesia.

The activists, all Christian, took a moment to pray, and then several began playing trumpets they’d brought along. Simon Saija, one of the organizers of the event, had emerged after years of hiding to read a text he’d composed about the history of the RMS movement.

But before Saija had a chance, about 50 local police arrived and began detaining the activists. More than a dozen were arrested, including three children who were later released.

A grainy video of the demonstration, obtained by ucanews.com, shows Saija, 47, speaking with law enforcement officers before he and other activists were escorted to a police vehicle.

The activists had brought RMS and United Nations flags with them, but according to rights monitors, were not able to raise the flags before being detained.

The arrests were another example of Indonesia's quick and heavyhanded reaction to independence movements, however small, across the sprawling archipelago. South Moluccan nationalists are part of a small and already marginalized movement that has not had a significant military presence in half a century.

The RMS attempted to secede from Indonesia in 1950, but was defeated by Indonesian forces in November of the same year. A low-level armed struggle continued on Seram Island until 1963. Like in Papua and West Papua provinces, the Indonesian government has reacted in recent years by handing down stiff prison sentences to individuals taking part in acts of civil disobedience such as the raising of the RMS flag.

The Indonesian government has grown extremely sensitive toward pro-independence agitation in Maluku following an embarrassing incident during a 2007 visit to Ambon by President Susilo Bambang Yudhoyono.

On June 29, 2007 a group of South Moluccan dancers passed uninhibited through several layers of security at Ambon’s stadium, and confronted Yudhoyono by performing a traditional cakalele war dance and unfurling an RMS flag.

The stunt – thought to have been masterminded by Saija – garnered a harsh reaction from the government. More than 70 people were arrested, and Human Rights Watch (HRW) documented evidence that many were tortured during detention and questioning. Ambon’s district court subsequently convicted more than three dozen of the men and sentenced them to prison terms ranging from five to 20 years.

Andreas Harsono, a researcher for HRW in Indonesia, warns that the nine men arrested in April “might face severe jail terms” like the infamous cakalele dancers.

He called on the government to uphold freedom of expression guarantees outlined in Indonesia’s constitution.

“The Yudhoyono government refuses to acknowledge the substance of the issue [which is] that these Moluccan people go to jail because of their peaceful political activism,” said Harsono.

The April rally “was not violent” and the participants “had no plan to be violent”, said Harsono, adding that the group should have been allowed to air their “political aspirations”.

But with such a sensitive subject, others say that the non-violent nature of the movement is immaterial to the government.

“For the Indonesian government, whether it is peaceful or not is irrelevant; it is disloyalty that alarms them,” said Sidney Jones, director of the Institute for Policy Analysis of Conflict.

“Dozens of individuals have been imprisoned for their peaceful political activities and protests, or possessing, raising or waving prohibited pro-independence flags,” he said.

One question that remains unanswered is why Indonesia’s government is so concerned about the political aspirations of a group that has such a small following. Both rights groups and RMS activists agree that in its modern incarnation, Maluku’s pro-independence movement lacks any significant political punch.

“There are still pro-independence activists, including myself … scattered across Maluku,” said Semuel Wailerunny, a lawyer and RMS activist. “But our power is weak. We realize that we are physically weak.”

Benedict points out that the armed wing of the RMS hasn’t been active since the late 1960s.

“Since then, pro-independence actions have mostly consisted of organizing peaceful flag-raising events, particularly around April 25, the anniversary of the RMS declaration of independence”, Benedict said.

Wailerunny, who has authored a book on the RMS’ struggles, says that Moluccan nationalists have turned away from violence and now focus their efforts on more “rational” means of resistance.

“What we are doing now is consolidating [the movement] and conducting discussions” aimed at educating local people about the independence movement, said Wailerunny. “We have learned from other nations’ struggles in terms of changing peoples’ minds through scientific means.”

Hendry Apituley, an RMS activist and history lecturer at Ambon State Polytechnic college, has taken it upon himself to educate students about the RMS.

“The history books issued by the government often fail to tell the real truth … so I explain about the history and the status of RMS” in lectures, he said.

Such lectures prompt many questions from students:

“‘Why were the facts never revealed? Why did the government keep things secret?’ In the end, the students felt like they were being cheated,” Apituley said. “Some became pro-independence activists after hearing about the facts.” The nine men arrested on April 25 have been charged with makar, or treason.

Indra Baskoro, secretary to the General Director of the National and Political Unity desk at the Home Affairs Ministry, said that the April 25 demonstration was “a violation against the Criminal Code’s articles 104, 106 and 107”.

By the time police arrived on the scene, “at least 150 sympathizers and supporters” of the RMS and Maluku Sovereignty Front (FKM) had already gathered for the march, said Baskoro. “Simon Saija’s reaction drove security personnel to arrest him. Also, a participant tried to raise the RMS flag kept inside his shirt.”

Local authorities have an obligation “to protect the people, to maintain the unity, and to maintain the national harmony and the Unitary State of the Republic of Indonesia”, added Baskoro.

The trial got underway last month in Ambon district court. A verdict was initially expected in October, but now could take as long as December to be announced, according to Yanes Balubun, the lawyer representing the nine activists.

Balubun expressed concern that an example would be made of the men. The authorities “already arrested them so they would feel shame if they let them go”, he said.

Wailerunny said that the April 25 demonstration had been intended “to show the Indonesian government that we still exist and our struggle continues”.

Some of the activists “carried flags and pamphlets”, Wailerunny said. “That’s all they did. The claim that they did something subversive isn’t true.”

Rights monitors including HRW and AI have slammed the Indonesian government over the arrests and treason charges.

AI considers the nine activists “prisoners of conscience”, said Benedict. “They were arrested and charged solely for their peaceful exercise of their right to freedom of expression and assembly.”

Benedict said the men “must be immediately and unconditionally released”.

“The Indonesian authorities should immediately release the nine activists arrested in Ambon,” he said, adding that HRW categorized the men as “political prisoners”.

Meanwhile, Saija has already suffered some health problems since his incarceration, according to a relative who has visited him in prison.

“His condition wasn’t that good. He looked skinnier. The food isn’t enough,” said the relative, who requested anonymity. “When I asked him about his condition in the prison, he said that he wasn’t safe there.”

The arrests are taking a toll on the families of the accused as well.

Izaak Leatemia, 58, a retired civil servant, was arrested alongside Saija. His wife, Jermina Leatemia Leihitu, 59, is now worried that the government might cancel Leatemia’s monthly pension of 2.3 million rupiah (about US$190) if he is found guilty – as has been the case with other government employees convicted of crimes.

“If there is no pension any longer, how can we eat? My husband’s pension is our only real source [of income],” she said. “I just sell snacks at a school. But the profit isn’t that much.” One of the root causes of discord between Moluccans and the government is Indonesia’s decades-old transmigration program.

A hangover of the 1950s, this ethnic gerrymandering program has drawn thousands of Javanese and other Indonesian Muslim migrants to the Maluku Islands with the offer of free land and agriculture subsidies.

Moluccans, the majority of which are Christian, say the program has created a significant economic gap due to the favoritism and subsidies that trans-migrants receive from the government.

Andreas Andhikolly, a local legislator for West Seram district, said there are two primary areas where inequalities exist between locals and trans-migrants: infrastructure and government assistance.

“The main issue in Maluku is development. This is what makes local people upset with the central government,” said Andhikolly. “The access to transmigration areas on Seram Island is much better than the access to villages where local people live.”

Andhikolly said that locals are not offered the skills training programs or given equipment like tractors or farming utensils.

The Home Affairs Ministry’s Baskoro said it was untrue that the government had not provided development and opportunities “for the people of Maluku”, and sought to highlight “the development of infrastructure and superstructure such as the construction of a flyover on Ambon Island” and a program aimed at promoting “safety, peace and welfare” in the province. But Augustan Tibali, a 58-year-old farmer from Kawatu village on Seram Island, said the “gap” between locals and trans-migrants has existed for years and remains a sore spot.

The gap extends to other areas as well. Tibali and other villagers in Kawatu say they need better local infrastructure, more modern schools, and job opportunities outside the agriculture sector.

“We don't know where or how to even express our concerns to the government,” said Tibali. What’s even more frustrating, he said, is that “the government must already know about the concerns of people on this island, but the government doesn’t do anything about it”.

Activists like Apituley say it would be wise for officials to start addressing such needs.

The people of Maluku “have the right to self-determination”, but under Jakarta’s tight grip, there is “no freedom of expression”, Apituley said. Many people have been “sent to jail” for expressing their opinions.

“Do we have to shed blood first before the government pays attention to our welfare?” The Maluku Islands, also referred to as the ‘Spice Islands’, have a large Christian population (Photo by Will Baxter)