In multiethnic, religiously diverse Penang, most people couldn’t be happier, but the government has plenty of work to do 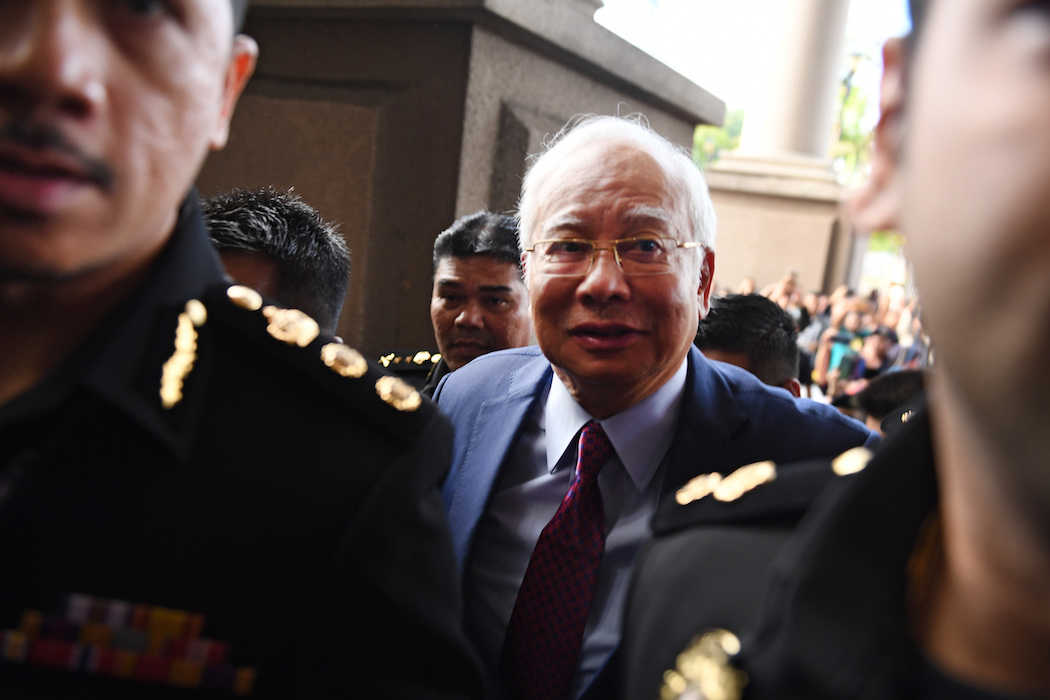 Former Malaysian prime minister Najib Razak arrives for a court appearance in Kuala Lumpur on July 4. Najib, 64, was detained on July 3 as the government of Mahathir Mohamad intensified a probe on corruption during his rule. (Photo by Mohd Rasfan/AFP)

As they go about their Sunday worship following the stunning May 9 election defeat of Najib Razak, the people of Penang, Malaysia's most ethnically diverse state, seem especially happy.

They will be even happier today that Razak was arrested on July 3 and will be charged with theft in relation to the government 1MDB fund he is believed to have plundered to the tune of at least US$700 million.

They are still basking in the afterglow of the opposition alliance's spectacular win, which was led by ex-prime minister Mahathir Mohamad, to oust the party he formerly headed and again become prime minister.

In the UNESCO heritage-listed city of Georgetown, a living monument to British colonial times and multiculturalism, the religious hub is on Jalan Masjid Kapitan Keling.

At the top of this street, across the park from the Fort Cornwallis, is St George's Anglican Church and there is also the Catholic Church of the Assumption built by city's founder, Francis Light.

A few hundred meters down the road is the impressive Chinese style Daoist Kuan Yin temple where groups of people light joss sticks, chant and bow — after all, it's ethnic Chinese who make up about 27 percent of Malaysia's population and the majority of this city.

Many locals who spoke to ucanews.com said they were stunned that ageing Mahathir had realized his past mistakes and changed for the better.

Next stop is the Arulmigu Sri Mahamariamman Hindu temple (Indians comprise 7 percent of Malaysia's population) and a block away is the city's impressive Kapitan Keling Mosque. Being a Sunday, all is quiet compared with two days earlier when it was a hive of activity for Friday lunchtime prayers.

This is Malaysia in all its multiethnic, religiously diverse glory, chipped away at elsewhere in Malaysia by years of misrule.

People remain chilled out in Georgetown, but further south in the country's capital Kuala Lumpur, things are moving at a cracking pace.

Mahathir, only weeks shy of turning 93, is seemingly in a hurry to restore his tattered legacy after handing over power to Abdullah Ahmad Badawi in 2003 in the wake of 22 years at the helm. Badawi's deputy, Najib, took over in 2009.

The cornerstone of Mahathir's 2018 victory was deceptively simple. Apart from his talismanic drawing power, it was the promise to remove a 6 percent goods and services tax (GST), an impost necessitated by the need to plug a US$5 billion hole in the country's finances left by money sucked out of the government's infamous 1MBD fund.

While it was the rising stench of corruption that drove middle-class Malaysians to Mahathir's opposition coalition Kapitan Nasional, it was the GST that finished the job. Hastily implemented in 2015 with little explanation, it spooked retailers into jacking up prices by 30 percent using an imagined multiplier effect.

It's the policy that comes up again and again when talking to business folk in Georgetown.

Regular Malaysians in the towns and villages, the ones Najib was relying on by way of a gerrymander of epic proportions to keep him in power, were watching their money drain away. It's the old adage that people, ultimately, vote with their hip pocket.

The canny Mahathir took no time in scrapping the GST: on June 1, only 22 days after the election, it was gone.

The other move induced by fading government finances that caused consternation among voters was the rapid embrace of China and its seemingly unending (but with nasty strings attached) largesse. Malaysia has taken out about US$34 billion in loans for projects under Beijing's ubiquitous "Belt and Road" trade, investment and infrastructure initiative.

"We find that the situation is worse than we thought when we were preparing the manifesto," Mahathir has said.

But how to plug the gap? Trying to retrieve the money from 1MBD is obviously one answer. Still, such things need to be dragged through the courts and it could take years for funds to be recovered.

Finance Minister Lim Guan Eng has claimed there will be benefits from rising oil-related revenues (the price for oil, a major Malaysian export, is rising) as well as spending cuts on non-essential projects such as high-speed rail links, and increased dividends from government-linked firms. A new sales and services tax planned for September, expected to be about 10 percent, could stir popular dissent.

Mahathir is using the classic tactic of distraction: he recently announced a push back against China and its claims in the South China Sea, related to five islands Malaysia also claims.

He said he wants less reliance on Chinese investment with a return to a more balanced portfolio of foreign investors that Malaysia traditionally benefited from. That would also give Malaysia more leverage to push back against Beijing's outrageous South China Sea claims.

Much of this is classic new government spin: financial holes worse than expected (although likely true), so promises of new benefits would have to be offset by belt tightening and new taxes.

In a hurry Mahathir may well be, yet he has some way to go in terms of polishing his legacy. There remain unanswered questions about to how to stabilize a country torn apart by years of overt corruption and government-driven social division

Perhaps most important is Mahathir's relationship with Anwar Ibrahim, whom he sacked as deputy PM in 1998 and jailed. Incarcerated once more as he emerged as a threat to Najib, he has now been released and pardoned.

Anwar is already a senior party player, but not yet in the government, although his wife, Wan Azizah Wan Ismail, is Malaysia's first female deputy PM. His successful political reconciliation with Mahathir could well be the key to Malaysia's future.