The Catholic Church in Malaysia is mourning a prominent theologian priest who empowered parish churches and played important roles in Asia.

Father John Gnanapiragasam died on Nov. 19 at his family home in Seremban, the capital city of Negeri Sembilan state in Malaysia.

Archbishop Julian Leow of Kuala Lumpur expressed deepest condolences to the priest's family and hailed him for his great contributions to the Church in Malaysia and Asia in his nearly five decades as a priest, according to a chancery notice by Kuala Lumpur Archdiocese.

Archbishop Leow remembered him as “an untiring priest who was on the front line of various social outreach and ecumenical projects.”

John Gnanapiragasam was born in 1944. He was the fourth of five sons and three daughters of his parents.

Following his ordination, he served as an assistant parish priest at the Church of Risen Christ in Sentul alongside French missionary Father Pierre Decrooq.

He then moved to Rome and obtained his doctoral degree in sacred theology from the Pontifical Gregorian University in 1978. He later studied psychology and obtained a postgraduate degree from Loyola University in Chicago, US, in 1992.

Back home, he became a faculty member of College General Major seminary. From 1990-92, he was a member of the theological advisory commission of the Federation of Asian Bishops' Conferences (FABC). 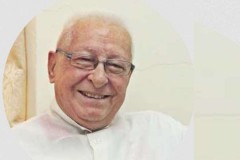 He also served as a lecturer and formator in Good Shepherd Seminary in Melaka, Malaysia, and taught ecclesiology at St. Francis Xavier’s Major Seminary in Singapore.

The priest became a household name in seven parishes he served in Kuala Lumpur, Klang, Seremban and Cameron Highlands for about 48 years, where he was known as a tireless supporter of various causes for the welfare of his communities, Frankie D’Cruz wrote on Free Malaysia Today on Nov. 21.

Titus Gomez, a Catholic who knew Father Gnanapiragasam since the 1970s, paid homage to “an effective and charismatic priest who was approachable and always warm and gentle.”

“He touched the lives of parishioners with his willingness to help and made friends, young and old, wherever he went,” he added.

His nephew, Michael Anthony, described his uncle as “many things to many people” and a priest who was “much loved by everyone.”

Father Michael Chua, chancellor of Kuala Lumpur Archdiocese, said Father Gnanapiragasam was a leading figure in implementing innovative pastoral directions from the FABC for Asian churches, popularly known as the New Way of Being Church.

Passionate about formation and evangelization, Father Gnanapiragasam pioneered various initiatives in the Archdiocese of Kuala Lumpur and beyond

The priest was the first director of the Archdiocesan Pastoral Institute from 1996 to 2002, when he oversaw and organized formation programs for laypeople, coordinated the various ministries and commissions under the archdiocese and published printed material for public dissemination.

Passionate about formation and evangelization, Father Gnanapiragasam pioneered various initiatives in the Archdiocese of Kuala Lumpur and beyond.

In 2003, he became a spiritual adviser when Alpha for Catholics, a 11-week formation course, was introduced in Kuala Lumpur. The program drew an enthusiastic response from over 20 parishes. The thirst of laity for solid formation encouraged the priest even more, so he met with key persons in the Augustine Institute based in the United States to bring in the online formation platform known as FORMED to spiritually and pastorally empower numerous Catholics.

He retired from active ministries in 2019. His brother, Monsignor James Gnanapiragasam, is a senior priest in Kuala Lumpur.

Father Gnanapiragasam was due to be buried at Holy Family Catholic Cemetery following a funeral Mass at the Church of the Visitation in Seremban on Nov. 22.