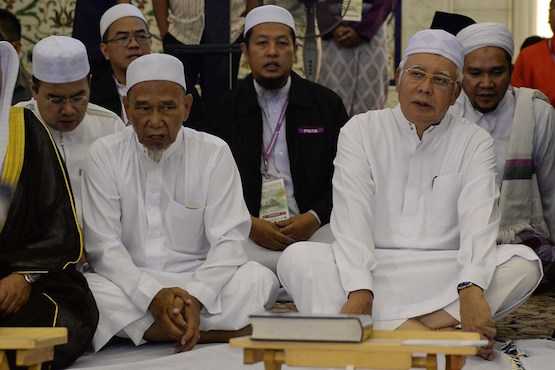 Malaysian Prime Minister Najib Razak (right) attending prayers at the Federal Territory Mosque during a gathering for students who had successfully memorized the Quran, in Kuala Lumpur, March 20.

The Malaysian Prime Minister's approval for parliament to debate the implementation of Muslim law punishments mandated by God, or "hudud," is an indication Islamic fundamentalism is gaining political traction in the Southeast Asian nation.

Through the approval, the coalition government's main party, the United Malay National Organization, is appearing to show its support for the inclusion of the hudud Islamic penal code in the secular constitution.

The whole idea of introducing such a penal system, which includes amputations and stoning for criminal offences, has caused confusion among the government's coalition partners who represent the ethnic Chinese and Indian communities.

Debate on the law — initially put forward by the Pan-Malaysian Islamic Party (Parti Islam Se-Malaysia) — has been deferred to the next parliamentary sitting in October.

The United Malay National Organization and the Pan-Malaysian Islamic Party "want to emerge as the true champions of Islam and not only that but more. It is their struggle to remain credible [among their community] and survive," Father Andrew told ucanews.com.

According to the priest, the scandal-tainted Najib needs the Pan-Malaysian Islamic Party on his side to keep his political opposition in check.

Former law minister Zaid Ibrahim said the Islamist party's leader Abdul Hadi Awang modified the hudud law to suit his own political needs and to maintain the support of Chinese voters ahead of two by-elections in June.

"Hudud, the original version, of God's law, of course applies to everyone and if punishment leads to death then so be it," he said in his blog The Zaidgeist.

Ibrahim said through the bill, the Pan-Malaysian Islamic Party president wanted to give Islamic courts unlimited power to deal out punishments.

Several Catholics interviewed by ucanews.com said they were worried by the latest developments.

One, a voluntary church worker in the east Malaysian state of Sabah, who wished to be known only as Steven, said that it was interesting that politicians from the state, which has a large Christian population, were supportive of the bill.

He was referring to Deputy Minister Rosnah Abdul Rashid Shirlin who seconded the bill for debate. Parliament Speaker Pandikar Amin and some of Najib's strongest supporters in the Lower House are also from Sabah.

Steven said that it was well known that Islamic evangelization has gained pace in his state.

A church-going couple he met after Sunday Mass voiced fears for converts under the proposed new law.

"Hudud may be used to target apostates and the punishment for them is death," said the couple that requested anonymity.

A prominent women's group have also voiced their concerns that the government may push through the hudud bill, resulting in human rights violations.

"We are of the opinion that Shariah laws have been applied in a discriminatory fashion, often victimizing the minority sects of our society," said a statement from the Joint Action Group for Gender Equality.

"The role of the state in enforcing an individual's practice of the Muslim faith needs to be urgently relooked at to remove further abuses under the name of the religion," the statement added.