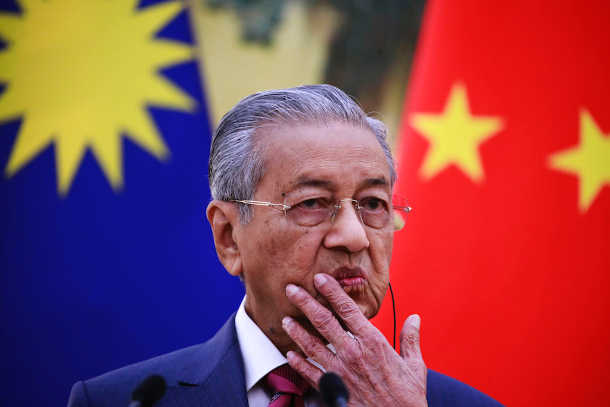 Malaysia's Prime Minister Mahathir Mohamad speaks at a press conference in Beijing, China, on Aug. 20. Mahathir has caused a storm with his comments about Jews. (Photo by How Hwee Young/AFP)

Malaysia's Prime Minister Mahathir Mohamad has caused outrage by suggesting that Jews use the idea of anti-Semitism as a cover for acting with impunity.

"There is one race that cannot be criticized. If you are anti-Semitic, it seems almost as if you are a criminal," he told the Associated Press.

"Anti-Semitic is a term that [was] invented to prevent people from criticizing the Jews for doing wrong things. When somebody does wrong, I don't care how big they are. I exercise my right of free speech. They criticize me — why can't I criticize them?"

Mahathir, 92, who is no stranger to controversy, recently came out of retirement to serve as prime minister of the Muslim-majority nation for the second time.

Mahathir's win was widely celebrated in his homeland but was viewed warily by Jews around the world because he has a long history of reciting time-honored anti-Jewish calumnies.

"Mahathir has been an outspoken Jew hater for a long time," said a Bangkok-based Australian academic and former political strategist who has been following events in Malaysia closely for years. The Jewish academic asked not to be named because he frequently visits the country.

"But it's not just about his personal animus to Jews. He's shrewd and knows that being against Jews and Israel sells well with some of his constituents. He uses this issue as a political tool and a rallying point for [much of] his support base. He isn't a devout Muslim but he likes to portray himself as a champion of Islamic causes."

During his first term in office as Malaysia's prime minister from 1981 to 2003, Mahathir repeatedly accused Jews of seeking to undermine Muslim countries.

He has also been in the habit of repeating anti-Jewish tropes long held by conspiracy theorists worldwide. Mahathir has posited that a global Jewish cabal controls the world's main banks, runs the international media and pulls the strings behind the foreign policy of western nations like the United States.

"The Jews are not only hook-nosed but understand money instinctively," Mahathir argued in his book The Malay Dilemma, which was published in 1970. "Jewish stinginess and financial wizardry gained them the economic control of Europe and provoked anti-Semitism."

Decades later, in 2003, during a speech at an international Islamic conference in Kuala Lumpur, Mahathir voiced a similar view by asserting that "Jews rule the world by proxy. They get others to fight and die for them."

Mahathir, who once boasted that "I am glad to be labeled anti-Semitic," has also accused Israeli Jews of engaging in "the senseless killing of their Palestinian enemies" and perpetrating "Nazi cruelty and hard-heartedness towards not just their enemies but even towards their allies."

Malaysia, a country of 30 million people, is home to only a handful of Jews, mostly expatriates working in Kuala Lumpur for foreign companies. Malaysia does not allow Israeli Jews to enter the country.

"Most [Malaysians] have never [met] and will likely never meet a Jew in their lifetime," said Rabbi Abraham Cooper, associate dean of the Simon Wiesenthal Center, a leading Jewish human rights organization headquartered in the U.S.

Yet despite an absence of Jews in Malaysia, anti-Jewish and anti-Israel sentiments are widespread in the country. According to a 2014 survey by the Anti-Defamation League (ADL), a U.S.-based Jewish organization, more than 60 per cent of Malaysians hold anti-Semitic beliefs.

Much of that anti-Jewish feeling is fueled by local politicians as well as conservative Islamic leaders.

"There is a decades-long tradition of political leaders in Malaysia defaulting to anti-Semitic tropes to explain all kinds of social, political and economic circumstances," said Michael Salberg, ADL's director of international affairs. "It is classical scapegoating, deflecting responsibility to an unseen hand."