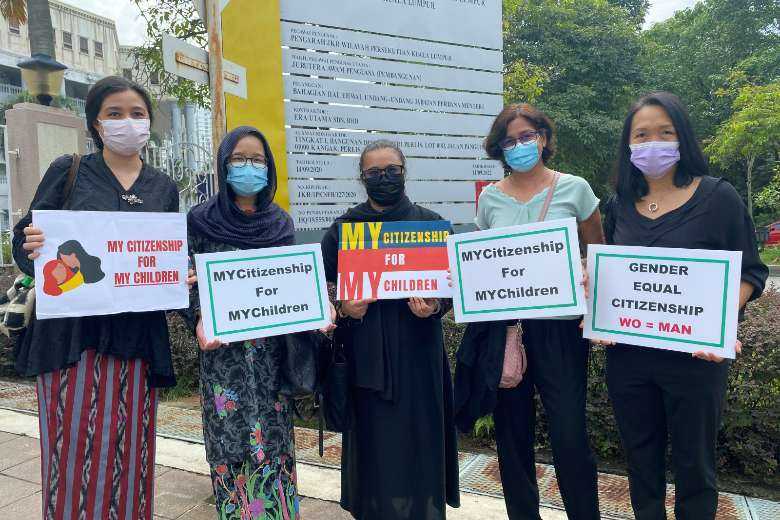 Plaintiffs in a case challenging a law preventing women in Malaysia passing their citizenship on to children born overseas protest outside Kuala Lumpur High Court on April 27. (Photo: AFP)

A group of Malaysian mothers have won a landmark legal challenge, overturning what they described as discriminatory citizenship rules affecting women who gave birth overseas.

The rules had meant a woman with a foreign spouse who had a child abroad was barred from automatically passing on her Malaysian nationality.

Similar restrictions did not apply to men from the Southeast Asian country who enjoy a straight path to citizenship for their offspring.

Socially conservative Malaysia was among only a handful of countries worldwide with such rules, with campaigners long complaining they were discriminatory.

But the High Court in Kuala Lumpur on Sept. 9 ruled in favor of a challenge brought by six Malaysian mothers who argued the regulations breached the constitution.

"This judgement recognises Malaysian women's equality, and marks one step forward to a more egalitarian and just Malaysia," said Suri Kempe, president of NGO Family Frontiers, which helped bring the case to court.

The judgement applies to all Malaysian mothers, not just the plaintiffs in the case, she said.

The lawyer for the mothers, Gurdial Singh Nijar, hailed a "momentous decision", saying the rules had "disrupted family structures".

There was no immediate reaction from the government, and it was not clear whether they would appeal the ruling.

If they brought their children back to Malaysia, the youngsters faced obstacles in accessing public services like free education and health care.

Women could apply for their overseas-born children to be granted citizenship but authorities rarely agreed.

According to Family Frontiers, the home ministry received over 4,000 applications between 2013 and 2018, but only approved 142.

The government had sought to get the mothers' challenge dismissed, insisting the rules were in line with the constitution.

But campaigners said they breached constitutional guarantees to equality before the law, and the court allowed the case to proceed.