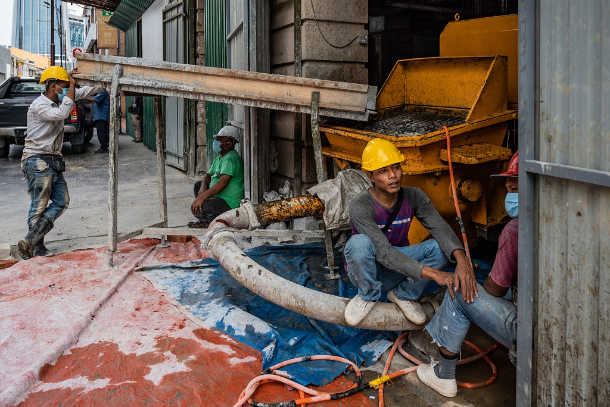 Workers rest at a construction site in Kuala Lumpur on July 3. Many migrant workers, who account for a considerable portion of Malaysia’s labor force, have had a hard time making ends meet on meager wages. (Photo: Mohd Rasfan/AFP)

A prominent rights activist has blasted Malaysia’s government for hiding the true rate of extreme poverty in the country for political gain.

According to recent government figures, the poverty rate last year was just 0.4 percent in the Southeast Asian nation of 33 million, which was the lowest in the world.

Yet Philip Alston, an Australian rights activist who previously served as the United Nations’ special rapporteur on extreme poverty, has dismissed the official rate as “misleadingly low,” arguing that it was “based on a statistical sleight of hand.”

Malaysia’s official poverty line is currently set at 980 ringgit (US$229) per household a month. However, that means a family of four can only spend 8 ringgit ($2) per person a day. By comparison, a single Big Mac meal at a McDonald’s eatery costs twice that.

According to the World Bank, poverty in Malaysia declined from 16.7 percent to 2.7 percent of the population between 2008 and 2015.

Critics have argued, however, that such rosy assessments are based on official government figures.

The government’s arbitrary rate for poverty in Malaysia “ignores the blatant mismatch between reality and statistics,” Alston said in a July 6 statement.

“Pretending that almost no one in the entire country lives in poverty doesn’t change the reality that millions are poor,” he added. “Saving face is one thing, but distorting the facts is quite another.”

Millions of Malaysians languish in what would be deemed extreme poverty by developed nation standards, yet the country’s federal government frequently touts its achievements in eradicating poverty.

Owing to the severe economic downturn in the wake of the Covid-19 pandemic, millions more have fallen on hard times, experts say. In April the country’s official rate of unemployment shot up to 5 percent, with the number of newly jobless people at nearly 800,000.

In addition to citizens, plenty of migrant workers, who officially number two million and account for a considerable portion of Malaysia’s labor force, have had an even harder time making ends meet on meager wages.

“Millions of non-citizens are disproportionately affected by poverty, including migrants, refugees, stateless people and unregistered Malaysians, who are systematically excluded from official poverty figures, neglected by policymakers and often effectively barred from basic services,” Alston said.

Migrant workers “have been central to the country’s economic success. Yet they have deliberately been left in a regulatory grey zone that facilitates sometimes scandalous abuses and generally poor conditions,” he added.

Similarly, the country’s indigenous peoples frequently live in abject poverty while facing various forms of discrimination. These communities have “far higher rates of poverty than the general population,” according to the Centre for Human Rights and Global Justice, a New York-based nonprofit group.

Indigenous people also “experience widespread violations of their rights, appropriation of their land and exclusion from social support.”

Making matters worse is that many women, too, are excluded from gainful employment in the predominantly Muslim nation where conservatives see the role of women limited to household chores.

Women “have an exceptionally low rate of workforce participation, are disproportionally stuck in lower-level jobs and are paid less than men,” the centre adds.

People with disabilities likewise face widespread discrimination and are up against “obstacles that prevent them from participating in society on an equal basis with others.”

Alston has called on Malaysia’s government to enact policies that will reduce actual poverty rather than hide the facts behind fudged statistics.

“The government should institute far-reaching reforms of the fractured and patchy social protection system to ensure that the needs of people living in poverty are comprehensively addressed, with a social protection floor for all,” Alston said.

“Covid-19 has demonstrated that anyone can lose a job through no fault of their own, and reinforced the absolute necessity of strong support programs.”