Move follows crackdown on opposition rallies and freedom of expression

Malaysian dissidents plan to protest at the United Nations Human Rights Council this week following arrests under the Sedition Act, a measure introduced by the British colonial government in 1948.

They will also raise the question of the Peaceful Assembly Act, passed last year, which is said to be used to block opposition rallies.

Three representatives of the human rights groups Suaram and Aliran will give evidence to the council’s special rapporteurs Frank La Rue and Mainia Kiai in Geneva on Thursday.

“The focus of the session we will attend is freedom of assembly and freedom of expression which is what the Malaysian government is attacking,” one of the three, Yolanda Agustin, told ucanews.com in London yesterday.

“[Prime Minister] Najib and his public institutions continue to wield the Sedition Act and the Peaceful Assembly Act to deny Malaysians the right to protest against a contentious election and its tainted result,” she said. 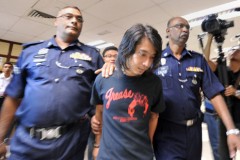 “Najib himself had promised to repeal that Sedition Act,” the statement added.

The results of the May 5 general election, which the ruling Barisan Nasional coalition won with a greatly reduced majority, “are now plagued by allegations of widespread electoral fraud that many Malaysians … now hold to be true” the statement said.

Nine protest rallies attended by “tens of thousands” had been held since the election, Bersih said, despite what it called “police intimidation.”

The rallies have been declared illegal under the Peaceful Assemblies Act and the Kuala Lumpur police chief, Datuk Mohamed Salleh, has said “we cannot tolerate” candlelit protest vigils.