A youth is caned for dating outside marriage in Banda Aceh, Indonesia, on Aug. 1, 2016. Neighboring Malaysia plans to cane Rohingya Muslim asylum seekers for illegally entering the country. (Photo: AFP)

The planned caning of numerous Rohingya asylum seekers in Malaysia has drawn condemnation from rights advocates who have called the punishment “cruel and inhumane.”

A group of 31 stateless Rohingya men, who were among hundreds of asylum seekers that landed in Malaysia in April after arriving by boat, were sentenced by a court last month to seven months in prison under Malaysia’s Immigration Act.

At least 20 have also been sentenced to three strokes of the cane, a punishment prescribed by the Immigration Act, in addition to a maximum of five years in prison and a fine. The caning of the men has yet to be carried out.

Nine Rohingya women and 14 children have been charged with illegally entering the country and are facing the prospect of months in prison.

In a newly released statement, Amnesty International has called on Malaysian authorities to abandon the plan to cane the detained asylum seekers.

“The Malaysian authorities must immediately abandon plans to whip at least 20 Rohingya men who are being punished simply for trying to seek safety,” the rights group said.

“The government should release all other jailed Rohingya refugees — including women and children — who have been unlawfully singled out, convicted and imprisoned for alleged immigration offenses, which are contrary to international law,” it added.

Judicial caning is a form of corporal punishment still commonly employed for various crimes across the Muslim-majority country. It is usually imposed on convicted felons on top of other punishments such as jail terms and fines.

In addition to civil courts, Islamic Sharia courts also impose this penalty for Muslim men and women found to have committed certain offenses. Caning serves not only to inflict pain its recipients but also to humiliate them, observers say.

According to rights activists, thousands of people are subjected to various forms of caning each year in Malaysia, including schoolchildren. Foreigners such as the Rohingya asylum seekers are also sentenced to be caned. 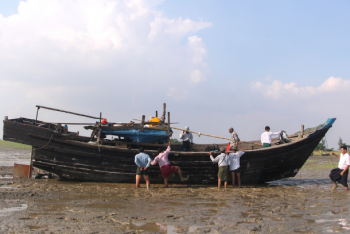 “The plan to viciously beat Rohingya refugees is not only cruel and inhuman but is also unlawful under international standards. To inflict such a violent punishment as judicial caning amounts to torture,” said Rachel Chhoa-Howard, a Malaysia-based researcher at Amnesty International.

“The men who face violent lashings on top of jail terms have already fled persecution and crimes against humanity in Myanmar. They also survived a dangerous journey at sea to Malaysia in search of safety. The inhumanity of this approach is atrocious.”

Rights activists say the caning of the Rohingya men is meant to send a warning to other asylum seekers to avoid coming to Malaysia.

A Muslim-majority country with a high standard of living by regional standards, Malaysia is a popular destination for stateless Rohingya Muslims who were forced to flee their homes in Rakhine state of Myanmar to neighboring Bangladesh in what observers have described as ethnic cleansing.

In recent months Malaysian authorities have hardened their stance on Rohingya asylum seekers by turning back numerous boats seeking to land in the country.

Police also rounded up hundreds of Rohingya men, women and children during immigration crackdowns with the ostensible aim of stopping the spread of Covid-19 in migrant communities.

Rights activists say such heavy-handed treatment of destitute asylum seekers is in violation of international laws and norms.

“[Malaysia’s] government should protect the rights of all refugees seeking safety — it is every state’s obligation under international law,” Chhoa-Howard said. “If they do not, the international community, including the UN, must take the government to task for their treatment of Rohingya.”