Synodal path is a process, not an event, says Sister Nathalie Becquart, undersecretary of the Vatican's Synod of Bishops Catholic bishops from Malaysia, Singapore and Brunei meet Pope Francis at the Vatican during an ad limina visit in 2018. (Photo: cbcmsb.org)

The Catholic churches in Malaysia, Singapore and Brunei are to begin a much-anticipated synodal process on Oct. 17, a week after Pope Francis kicked off the two-year global consultation leading to the Synod of Bishops on Synodality in Rome.

For the first time, the synod will be celebrated in a decentralized manner in October 2023. It will be held not only at the Vatican but also in each church on five continents in three phases — diocesan, continental and universal.

The theme for the Synod of Bishops is “For a synodal church: communion, participation and mission.”

As part of the preparation, representatives of the Catholic Bishops’ Conference of Malaysia, Singapore and Brunei (CBCMSB) had an online meeting with top officials of the Vatican’s Synod of Bishops last month, reports Catholic Sabah, the official publication of the Archdiocese of Kota Kinabalu in Malaysia.

CBCMSB president Bishop Sebastian Francis of Penang, Malaysia, and executive secretary Charles Bertille virtually met with Sister Nathalie Becquart, a French nun and undersecretary of the Vatican’s Synod of Bishops, and members of the Synod Secretariat on Sept. 17.

During the meeting, one of her series of encounters with regional and continental bishops’ conferences, Sister Becquart emphasized three key words of the synod's theme — communion, participation and mission — and asked church leaders to be open to take up the challenge of addressing them in their countries.

Our challenge for the synod is to empower the laity to be the protagonist for a missionary church. We can envision the pastors and lay people working together

The nun quoted the pope and said, “Synodality expresses the nature of the Church” and “We have to learn synodality.”

The synod, she said, is therefore “a process and not an event,” which requires a synodal conversion of the Church.

The word “synod” means “walking together” and contains everything we need to understand, she explained.

Sister Becquart said the preparatory document and the Vademecum (handbook) have been released. 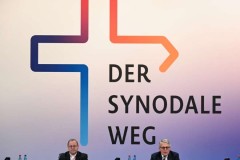 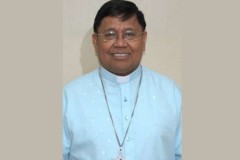 Australians end first phase of 'walking together' in Plenary Council

The preparatory document contains questions, which are “at the service of the synodal journey” to facilitate the first phase of listening to and consulting the people of God, while the handbook offers guidelines for bishops and those who help in facilitating the synodal process locally on how they can best listen to and consult with Catholics and the wider community, she said.

The representatives of CBCMSB also had a Q&A session with Sister Becquart on how the synodal process is taking place today.

When asked how reports from all churches will be put together for the synthesis at national level, she said that “synthesis is an act of discernment, not an academic exercise.” So, national teams or secretariats will draft the synthesis, which will become a national-level working document.

For a diverse church like India, where small communities have no access to institutional offices, the Church must listen to them and produce the preparatory document in local languages or a simplified and shorter version, she said, adding that diverse communities of people must be reached to ensure no one is excluded from the synodal journey, especially the poor.

“The synodal conversion of the Church will take time; it will not finish in April. And it is different in each culture. Remember this is not a university examination. Listen to the call of the Holy Spirit and be on the road,” Sister Becquart said.

The Vatican encourages lay voices to be heard at diocesan and national levels, with the laity included in the pre-synodal exercise at both levels, she said.

“Our challenge for the synod is to empower the laity to be the protagonist for a missionary church. We can envision the pastors and lay people working together,” the nun added.

As the synodal process takes place amid the Covid-19 pandemic, the churches need to “be creative and “adapt according to what is possible.”