Books returned 'without any damage or conditions', priest says 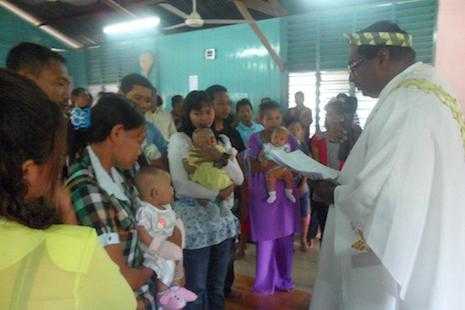 By Elizabeth Zachariah for the Malaysian Insider

Police have returned all 31 copies of Christian hymnals to a Catholic priest, two weeks after they were seized near a bookshop in Tangkak, Johor for containing the word "Allah".

Father Cyril Mannayagam said the books were handed over to him at the Ledang district police headquarters in Tangkak at 9:45pm Thursday without any conditions.

Father Cyril, who was accompanied by his lawyer, said the hymnals were in good condition and were not stamped with any warning by authorities.

"I am very happy that the books have been returned to me without any damage or conditions attached by the authorities," he said. "And I am glad that the authorities did not prolong this further and gave me back the books in time for Christmas."

He said he would send the books on to Orang Asli parishioners, for whom they were originally intended.

Father Cyril had earlier said he would not accept the books if they had been damaged or if the authorities attached a condition to the usage of the books.

The hymnal books, with the word "Allah" and a crucifix on the front cover, were seized by police on December 5 after being sent for photocopying at a bookshop in Tangkak.

When the priest returned to pick up the books, several policemen told him to follow them to the nearby police station for questioning.

Police previously said the priest was being investigated under Section 298A of the Penal Code for causing disharmony, disunity, or feelings of enmity, hatred or ill-will on grounds of religion.

Following the incident, Johor police had come under criticism, with lawyers citing a decision by the Supreme Court in 1988 which rendered the law used on Father Cyril as unconstitutional.

Father Cyril, who has worked with the Orang Asli Christian community for over four years, said the books were meant for a Christmas service with some 100 Orang Asli parishioners in Bekok.