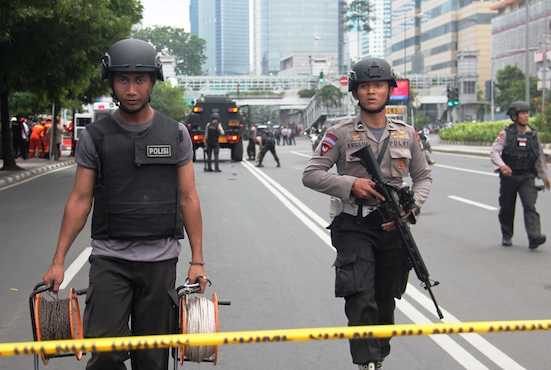 As Muslims flocked to mosques for Friday prayers, Malaysia went on heightened alert following the Jan. 14 terrorist bombings in Jakarta.

Friday sermons dwelt on the dangers of ideas and opinions through social media and other means that were not in line with the Quran.

While there was nothing in the sermon — distributed by the Department of Islamic Development Malaysia — that referred directly to the horrifying events in Jakarta, imams could have commented on it to their congregations.

Casual observers noted that police were more prominent on Jan. 15 at various places around Kuala Lumpur and tourist locations around the country.

"Extra precautionary measures will also be implemented in border areas to prevent infiltration by terrorists," he said in a press statement hours after a deadly hail of bombs and gunfire left six dead and several others wounded in the Indonesian capital.

The police chief's statement was striking given the usual low-key distribution of information about the threat of terrorism in the country.

Several nations that joined the anti-Islamic State alliance, such as Turkey, Indonesia, Malaysia and Pakistan, have become targets of terror attacks believed linked to the terror group which announced these countries will not be spared.

Indonesian police reportedly shot dead four of the attackers believed to be members of the group that calls themselves the Islamic State, while the coffee outlet Starbucks closed all of its Jakarta stores after one of the cafes was targeted.

In recent months, law enforcement and intelligence services have warned of Islamic State activities in Asian countries, including Malaysia and Indonesia, with several arrests of suspects made and plans for attacks reportedly foiled.

Khalid at the time acknowledged to local media that there had been chatter of the existence of an internal police memo detailing the presence of at least 18 potential suicide bombers in the country.

The southern Philippines and the east Malaysian state of Sabah on Borneo island are both considered training grounds for Islamic militants.

Sabah has been a gateway for suspected terrorists and insurgents operating in the southern Philippines and travelling elsewhere.

Malaysian Defense Minister Hishammuddin Hussein said the government is aware of the Islamic group's threat in Sabah after it was reported that a local man had taken part in terror activities in the southern Philippines.

Intelligence sources have noted increased meetings between members of armed groups in the Philippines like the Moro Islamic Liberation Front and Abu Sayyaf along with those from the Islamic State over the last year.

European governments and the United States have periodically warned their citizens against travelling to Sabah where a curfew at sea has been in force in the scenic east coast of the state since 2013.

Hussein also said in November that several Malaysian leaders including himself were on an Islamic State hit list.