Two years on, Zafar Ahmad is still without protection from harassment and threats 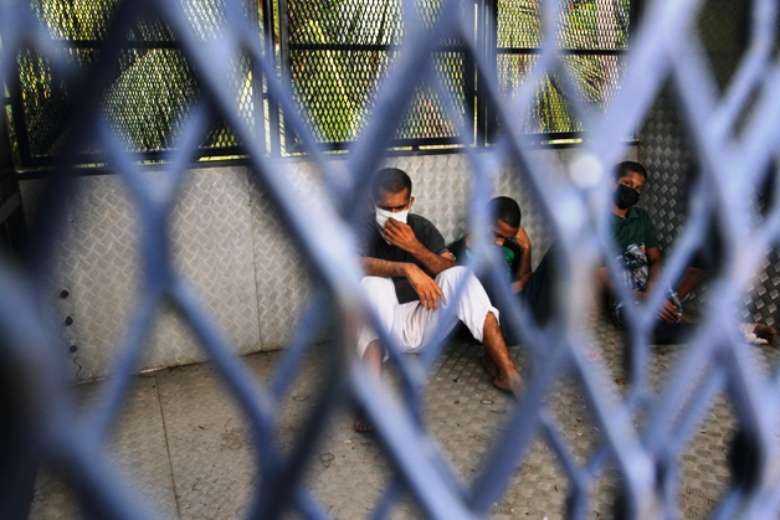 Rohingya migrants, who had escaped from a detention center after a riot, sit in a Malaysian immigration truck after being recaptured in Penang on April 20. (Photo: AFP)

Civil society groups across the globe have expressed their deep concerns about the situation of stateless Rohingya refugees and human rights defender Zafar Ahmad Abdul Ghani.

A joint statement signed by 65 national, regional and international groups has highlighted the harassment and threats against Ahmad and his family due to the failure of Malaysian authorities to ensure his protection.

Ahmad, president of the Myanmar Ethnic Rohingya Human Rights Organization, has been systematically vilified and receiving death threats since April 2020 after being falsely accused of demanding citizenship and equal rights for the Rohingya in Malaysia during the Covid-19 pandemic.

Ahmad and his wife have lodged seven reports of threats and harassment with Malaysian police but there has been a lack of action by authorities to either effectively investigate the threats against him or provide him protection, the statement said.

“These threats have had a serious impact on Ahmad’s health and well-being. Security concerns have prevented him from appearing in public for the past two years. It has also severely affected his family — the toll has been worsened by Zafar Ahmad’s lack of access to treatment and inability to maintain his livelihood,” it added

On Dec. 3, 2021, Mary Lawlor, the UN special rapporteur on the situation of human rights defenders, sent a joint communication to the Malaysian government seeking a response within 60 days.

“The government finally responded on March 28, stating that following an investigation the authorities have decided that no further action will be taken, which is extremely disappointing,” they added.

The groups are extremely concerned that Zafar Ahmad has not received urgently needed protection from the UN High Commissioner for Refugees (UNHCR).

“It is the obligation of the UNHCR to protect Zafar when he faces threats to security and life following his peaceful and legitimate work as a human rights defender. Further, the delay in the resettlement process only puts Zafar’s life at risk and jeopardizes his physical health, mental health and well-being including that of his family members,” the statement said.

Online attacks have not only been aimed against Ahmad but also against Rohingya refugees since the pandemic began, resulting in the escalating spread of xenophobia, hate speech, rights abuses and harassment against Rohingya, refugees and migrants.

In light of the concerns, the civil society groups have recommended that the Malaysian government take immediate measures to protect Ahmad and his family, reactivate the investigation into the threats against him and ensure that the investigation is thorough and make public the results.

They further demanded that the mainstream media deliver accurate information, particularly involving the vulnerable refugee community in Malaysia, to prevent hate speech, xenophobia and crimes against them, while social media platforms must take responsibility for smear campaigns, spreading false accusations, hate speech and xenophobia against Ahmad, Rohingya refugees and migrants.

ZAFAR AHMAD ABDUL GHANI
23rd JULY 2022 DEAR CHIEF EDITORS, PRESS STATEMENT SUPPORT GAMBIA FOR THE ROHINGYA GENOCIDE CASE AT THE INTERNATIONAL COURT OF JUSTICE (ICJ): AN URGENT NEED FOR MORE STRATEGIC MEASURES AND POLITICAL WILL TO END THE LONG DECADES OF ROHINGYA GENOCIDE. Myanmar Ethnic Rohingya Human Rights Organization in Malaysia (MERHROM) welcomes the decision by the International Court of Justice (ICJ) on 22nd July 2022 in favour to the Gambia in its case against the Myanmar for the Rohingya genocide. This means more work needs to be done to prepare for the next public hearing. This is a very crucial stage for the most persecuted ethnic in the world - the Rohingya, in seeking justice and accountability against the perpetrators of the Rohingya Genocide. We are really thankful to the Gambia Government for taking this significant and meaningful effort despite all the challenges faced by the Gambia Government. This is a manifestation of a strong political will to end the long decades of Rohingya genocide by a UN member state. The Gambia efforts must be supported by the rest of the member states in our struggles to end the genocide in 21st century. Therefore, MERHROM call upon: The United Nations, UN member states, civil society organizations and the international community to: 1. Support Gambia Government in whatever possible ways to prevent the Rohingya Genocide, protect the Rohingya and punish the perpetrators towards ending the Rohingya genocide 2. Increase pressure on the Myanmar military to immediately stop the acts of genocide against the Rohingya 3. Constantly monitor and documenting the acts of genocide against the Rohingya by the Myanmar military and its agents 4. Constantly monitor and documenting on the implications of the Rohingya genocide on the Rohingya outside Myanmar particularly in Cox’s Bazar refugee camps and other transit countries 5. Fully enforce the Genocide Convention 1948 without any reservations and veto 6. Immediately stop business and military deals with Myanmar military as manifestation of a strong political will to save the life of the Myanmar people from the Genocidal regime. 7. Immediately send Peacekeeping Missions to Myanmar to prevent genocide and crimes against humanity in Myanmar across ethnic groups 8. Immediately invoke Responsibility to Protect (R2P) to prevent Rohingya genocide and punish the perpetrators. Nothing should hamper R2P as millions of Rohingya have lost their lives during long decades of Rohingya genocide 9. Reform the Veto Power in order to stop genocide, war and conflict that sacrifices billions of innocent lives throughout the world. Recognizing that at all periods of history genocide has inflicted great losses on humanity, the Genocide Convention must not have any reservations on its articles and cannot be vetoed. The Genocide Convention must be translated into actions without delay, if not “Never Again” slogan will only be an empty promise. We thank all of you who supported and intervened in the struggle of the Rohingya and the people of Myanmar for Justice, Peace and Freedom. Thank you, “JUSTICE DELAYED IS JUSTICE DENIED”. Yours sincerely, Zafar Ahmad Abdul Ghani President Myanmar Ethnic Rohingya Human Rights Organization in Malaysia (MERHROM) Tel No: +6016-6827 287 Blog: www.merhrom.wordpress.com Email: [email protected] Email: [email protected] https://www.facebook.com/zafar.ahmad. https://twitter.com/merhromZafar
Reply