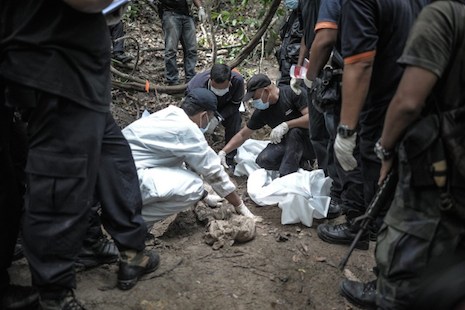 Malaysia's government has expressed shock at finding human-trafficking camps and graves near the Thai border, but for local villagers like Sani Hashim the human clues were right there in plain sight.

Sani is one of many residents of the remote area in Perlis state who say that starving illegal migrants — some bearing signs of mistreatment — have for years staggered from nearby thickly jungled hills, where a network of graves and camps was recently found.

Their accounts stand in stark contrast to those of Malaysian authorities — long accused by activists of tolerating an abusive and deadly regional human-trafficking trade — who claim the grisly discovery came as a surprise.

"I have lived here for 30 years and I have seen many Rohingya, and they are always in bad shape," said Sani, 80, referring to the Muslim Rohingya minority which flees persecution in Myanmar.

"We do what we can. And if they are not able to stand or walk, we call the authorities who take them away," he said.

Malaysian police say a total of 139 gravesites and 28 recently abandoned camps had been found, capable of housing hundreds of people.

It marked the most direct evidence yet of a brutal and large-scale human-trafficking trade on Malaysian soil.

Similar smaller sites found in Thailand in early May prompted a police crackdown there that has severely disrupted the once-steady flow of migrants from Bangladesh and Myanmar, down through Thailand and across the land border into Muslim-majority Malaysia.

Malaysia's government initially denied such brutal sites could exist on its soil. "I am shocked," Home Minister Zahid Hamidi declared when announcing the discovery Sunday.

But activists say they have fed authorities evidence for years, yet nothing was done.

"In Malaysia, they've had the blinders and earmuffs on and have let these networks operate with impunity," said Amy Smith, executive director of human rights group Fortify Rights.

She said trafficking victims and even smugglers had years earlier told Fortify Rights about vulnerable migrants held against their will in camps or private homes in Malaysia.

"Malaysia needs to be held accountable for the abuses taking place on its soil," she said.

Relatively prosperous Malaysia is a magnet for migrants from poorer regional neighbors.

But the US State Department's annual human-trafficking report says Rohingya and other migrants are often forced into abusive or exploitative work, preyed on by police or other authorities, trapped in virtual slavery via debt bondage or forced into prostitution.

Last year's report — the next is expected in June — put Malaysia on its lowest possible tier, for countries that are failing to stop the trade, which leaves them open to possible US sanctions.

Thai authorities have faced sustained criticism over the years for failing to stop trafficking — or even profiting from it.

But the graves in Malaysia are focusing new attention on its own poor record and whether corruption is to blame.

Corruption is indeed common in Malaysia. The police force in particular is criticized by reform advocates as unprofessional, corrupt and prone to brutal treatment of detainees.

"For trafficking to grow to the scale it did, you must have strong players. You need traffickers, authorities and also local people involved," said Aegile Fernandez, of Malaysian migrant-rights group Tenaganita.

Police have not given a cause of death for the interred bodies.

But Fernandez said evidence has existed for years of migrants being held captive along the border, sometimes killed if friends or family could not pay ransoms or if the migrants fell ill.

Malaysian police said this week 37 people had been arrested this year on suspicion of human-trafficking, giving no details. Home minister Zahid said Tuesday several forestry officials on the border had been detained.

The Malaysian graves were found between May 11 and 23, and some were occupied as recently as two weeks ago, National police chief Khalid Abu Bakar said.

But other police told AFP the camps were known about much sooner. The Star newspaper Wednesday quoted unnamed police officials saying they were found as early as November.

"If investigations reveal police, immigration, even the military or any other people were involved, we will not condone any of it," he said.

Lyza Ibrahim, a shop owner who has frequently provided food, water and clothing to distressed migrants, is among many in the area who feel action came too late.

"If they really had the information earlier, the police should have come and checked for the graves and these kinds of camps in the jungle," she said sadly. AFP