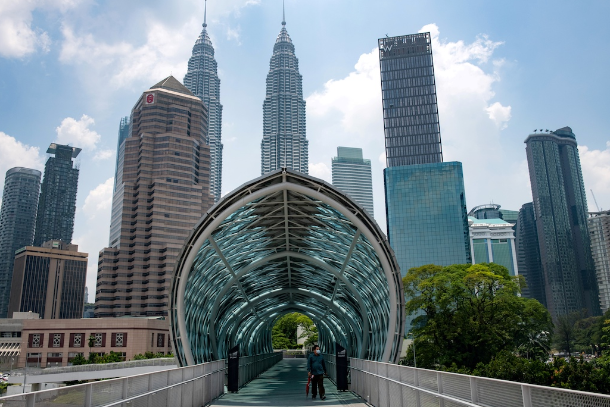 A man wears a face mask at Saloma Link Bridge in Kuala Lumpur. Malaysian immigration authorities have been accused of heavy-handed treatment of migrant workers and asylum seekers as part of efforts to stop the spread of Covid-19. (Photo: AFP)

A migrant worker from Bangladesh who was interviewed in a documentary about the maltreatment of foreign laborers in Malaysia has been deported.

Mohammad Rayhan Kabir, 25, was taken to Kuala Lumpur’s international airport on Aug. 21 by immigration officers to be flown back to Bangladesh in a move that rights activists have denounced as a violation of the man’s rights. He was also barred from re-entering Malaysia.

The case is seen as yet another blow to media freedom and freedom of speech in Malaysia.

Rayhan was detained and handcuffed in Kuala Lumpur on July 24 after he was featured in a July 3 documentary by the Qatari media outlet Al Jazeera.

The documentary titled “Locked Up in Malaysia’s Lockdown” reported the widespread outrage caused by Malaysian immigration authorities’ heavy-handed treatment of migrant workers and asylum seekers as part of the government’s efforts to stop the spread of Covid-19. Interviewees spoke of the various forms of harassment and discrimination to which they were subjected.

During repeated immigration crackdowns in May and June, local authorities rounded up hundreds of people, including stateless Rohingya asylum seekers, as well as women and children, only to detain them in overcrowded immigration detention centers with unhygienic conditions.

Several rights groups condemned Malaysian authorities over the man’s arrest and called for his release.

Kabir was not alone in being harassed over what authorities deemed as negative media coverage harmful to Malaysia’s image in the wake of the mass detentions.

Al Jazeera expressed concerns over the detention of Rayhan, saying the Bangladeshi man had been targeted by authorities “for choosing to speak up about some of the experiences of the voiceless and the vulnerable.”

Authorities raided the local offices of Al Jazeera on Aug. 4 on the grounds that the channel’s Kuala Lumpur-based staff had violated the country’s Communications and Multimedia Act. Six of the channel’s journalists, five of whom were Australian citizens, were interrogated by Malaysian authorities and accused of having engaged in sedition and defamation in the documentary.

In response, observers and rights activists accused the government of seeking to further curtail already limited media freedom in the country.

“The leaders told Asian reporters to bow to authority and hierarchy while Western journos should respect distinctive Asian systems.

“There are no distinctive Asian values involved this time. Just the strident authoritarian and nationalist script being used at full volume in multiple capitals around the world.”

Several Malaysian journalists were also harassed over their reporting on the large-scale crackdown on migrant workers and asylum seekers in Kuala Lumpur.

In May, a Kuala Lumpur-based correspondent for The South China Morning Post was summoned for questioning by police after she had reported on the crackdown.

“Prime Minister Muhyiddin Yassin should recognize that everyone has a right to criticize their government without fear of investigation or prosecution.”