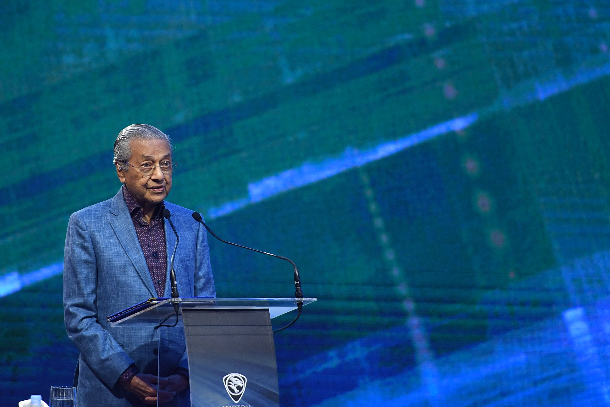 Coming into 2018, Malaysia was convulsed by chaos and labelled a kleptocracy. Against all the odds, there is now a feeling of hope for the future. The old order has been toppled, the powerful hauled up and the days of casual crookedness over.

Angered by massive corruption scandals and increasing racial and religious tensions, Malaysians united May 9 to sweep aside the United Malay National Organisation-led Barisan Nasional coalition, which had ruled the country since independence in 1957.

They installed a new governing coalition, Pakatan Harapan, led by 93-year-old Mahathir Mohamad, who along with Anwar Ibrahim performed the greatest of come-backs in the country's history, to chart a new course for the multi-ethnic country.

The new government's biggest successes after its shock victory was to secure a royal pardon on the basis of a "miscarriage of justice" for Anwar, Mahathir's one-time deputy who he sacked in 1998 and who subsequently spent 11 years in jail.

Anwar went on to a landslide by-election win in October, a popularity test that will help him prepare for his eventual takeover when Mahathir steps down, as he promised, in two years.

Mahathir has set about the task of redefining the idea of Malaysia on all fronts — political, financial and social. His government has pledged to join with the majority in the United Nations in affirming human rights.

However, the ratification of one of the U.N. documents, the International Convention on the Elimination of All Forms of Racial Discrimination (ICERD), was deferred when Malay Muslim politicians objected, instigating mass hysteria among a large section of the Malay community fearful they would not be able to compete with other races, notably of Chinese and Indian heritage.

The ICERD episode provided Malaysians with a vivid cautionary tale about the dangers of isolationism, religious extremism, false accusations and lapses in due process.

Still, for the first time, Malaysians got to witness the rule of law being applied without fear or favour.

Barely weeks into the new administration, police raided the houses of former prime minister Najib Razak and his wife and seized a cache of jewellery, handbags and watches worth up to US$273 million. It was described as the largest such seizure in Malaysian history. New Malaysia, ready or not

Both have since been charged with multiple counts of corruption and are awaiting trial in the new year.

The rorting of 1Malaysia Development Berhad, or 1MDB state investment fund, which was launched by Najib in 2009 shortly after he became prime minister and closely overseen by him, is unravelling.

Malaysia may yet recoup some of the massive losses that damaged the nation's development and its people's prosperity.

Malaysian authorities have filed criminal charges against Goldman Sachs and several individuals in connection with the multibillion-dollar international fraud scandal that led Malaysia to be labelled a kleptocracy by U.S. investigators.

As the year ended, the government was also put on notice about the gulf between the different communities in the ethnically diverse country when a riot erupted over the relocation of a Hindu temple. Tragically it claimed the life of a fire fighter.

There are suspicions that the temple disturbance was instigated by people hoping to cause sufficient chaos to disrupt the government's reform agenda, especially the war on corruption and abuse of power.

Hard-line Islamic conservatism, which flourished under the previous government, has tapered off, though instances of misogyny and child abuse have shamed the nation.

There was widespread revulsion over the public caning of three women found guilty under Sharia of lesbianism and prostitution.

The marriage of an 11-year-old child bride from Thailand to a Malaysian man 30 years her senior put the spotlight on sexual abuse and the lack of protection for children.

The outcry resulted in a government directive to all state authorities that the minimum marriage age is now set at 18-years for Muslims and non-Muslims alike.

The fear by the minorities that their children could be pawns in religious conversion tussles was settled by the country's highest court when it ruled that that the consent of both parents was needed to change a child's religion.

The case had been brought by kindergarten teacher M. Indira Gandhi who challenged the unilateral conversion of her three children to Islam by her ex-husband Muhammad Riduan Abdullah.

Press freedom has been assured by the new government but a manipulative anti-fake news law brought in by the previous administration has not been repealed.

One of the tools the government hopes to use to ensure harmony is the enactment of a new law to safeguard religious and racial sensitivities.

The long-ruling BN coalition has begun to disintegrate, signalling the demise of race-based parties. The coalition's linchpin, UMNO, which had the most MPs in parliament, has found itself decimated and on the verge of collapse amid defections and leadership quarrels over its future.

While there have been undeniable disappointments after the ‘giant zing’ euphoria following the 14th general election, individual Malaysians have shown they have the energy and courage to continue the struggle for a better country.

One shining moment of hope was illustrated in a supermarket here by a teenage shop attendant when she was confronted by a foul-mouthed, racist shopper who swore at her. She kept her composure and dismissed his hate with a smile.

On that note I would like to take the opportunity to wish everyone a very happy Christmas and New Year.