Pastoral care in Asia, as Pope Francis says, should help Asians lift up their eyes to see others 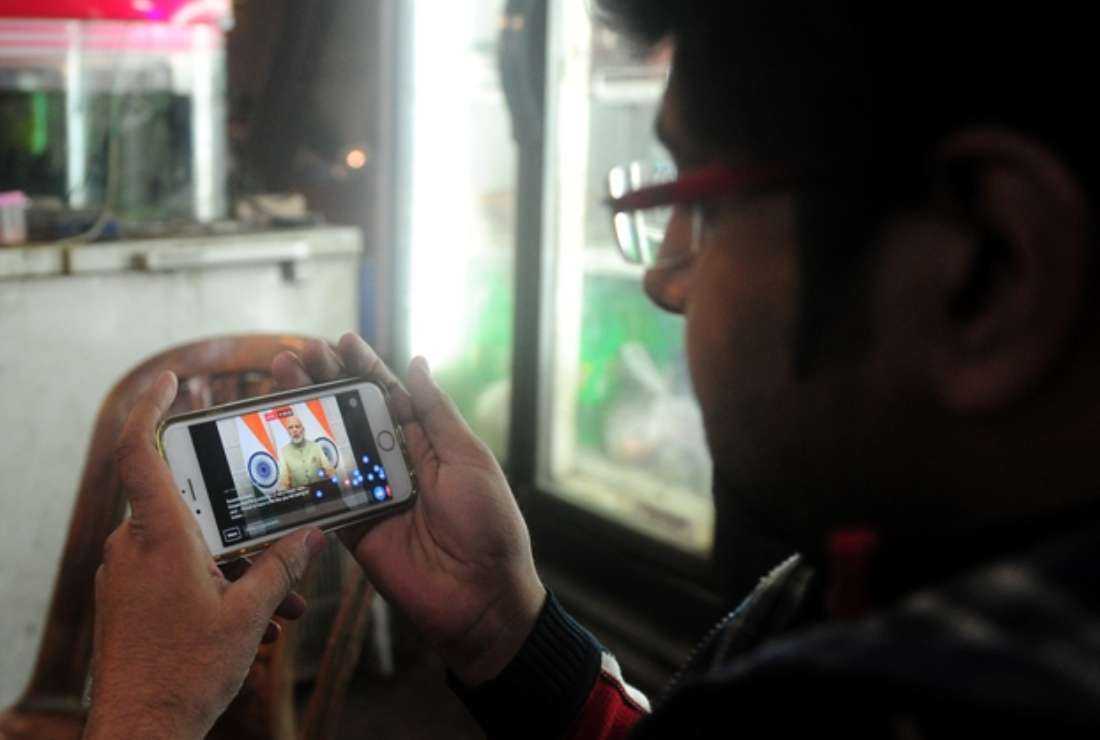 An Indian youth uses his cellphone to watch a live broadcast by Prime Minister Narendra Modi in Allahabad on Dec. 31, 2016. (Photo: AFP)

There is no shortage of epithets to understand the ongoing radical technological makeover of Asian society, which is also called the fourth industrial revolution.

Spotify, which produces personalized playlists by observing the listening habits of its users, has 195 million paying subscribers, much more than the 166.3 million population of Bangladesh which last month reached out to the International Monetary Fund (IMF), seeking economic assistance worth US$4.5 billion.

The total earnings of Alphabet, Google’s parent company, were $41 billion in 2020 while Nepal, which was once compared with bankrupt Sri Lanka, had to manage to feed its entire population of 30 million in the same period with $33.43 billion.

What makes Google and other tech majors insanely profitable? Just like Spotify with its non-paying users, Google presents its search commodity for free, which helps the tech giant to sell another profitable commodity — access to its users’ screens and attention — among its advertisers.

“Our eyes are meant to look into the eyes of others"

Yes, eyes and attention matter while an algorithmic economy is preaching mechanized perfection for humanity.

If workers were the backbone of the old-fashioned economy, in the digital economy it is the non-productive rentiers, due to their network dominance, hold over algorithms and data sets.

Users have to be glued to their gadgets or stay connected so that these corporations can convert vast troves of personal data, surreptitiously extracted, to add to their bottom line.

This is what Pope Francis had in mind when he urged young people to look away from mobile phones to make eye contact with the people and things around them.

With their control of data (information), big-ticket tech firms are in a position to reshape the entire physical economy. Amazon and Walmart have sufficient global clout as digital platforms have eradicated the marketplace. It is via innovation that they accumulate profit. Why else do Alphabet and Amazon pump in tens of billions in R&D?

“In a world that tends to isolate us, divide us, and that pits us against each other … the secret is precisely to take care of others,” the pope said.

The pope was asking the youth to reduce inequality, consume less, and lead less energy-intensive lives.

Hundreds of millions of Asians have currently become reliant on digital platforms like broadband internet networks for their employment, healthcare, education, and social interactions, which are controlled by a small oligopoly of telecommunications and digital corporations.

The digital economy in Asia is extracting wealth on behalf of those at the top, facilitated by governments through e-commerce platforms to control the entire value chain.

These e-commerce firms control not only data on consumption but control data on logistics, production, who needs what, when they need it, what needs to be manufactured and in what quantities, who should produce it, and when it should be transported.

The Covid-19 pandemic which originated in Asia is having a profound and long-lasting influence on otherwise traditional Asian society, its economy, and politics.

Filipinos, who are mainly Catholics, spend an average of nearly 11 hours online per day, which is 60 percent more than the global average. Next in line among the Asian nations is Malaysia, whose citizens spend more than 9 hours a day, with Indonesians and Thais not far behind.

Among the South East Asian nations, Vietnam trails below the global average with Vietnamese people spending an average of 6 hours and 47 minutes online per day.

Across South-East and South Asia, people aged 16 to 24 are leading the pack and spend an average of more than 10 hours daily online, which means close to three full days in a week dedicated to the internet.

In fact, young women in South-East and South Asia spend even longer online than their male counterparts, as per research data available.

Digitization has become the growth engine for economies for Asians, especially for younger generations. The Philippines and Malaysia have become the top two nations in the world in e-commerce retail growth, posting 25 percent and 23 percent per year growth, respectively.

Asia is now home to nearly 60 percent of global online retail sales, which will become a $2 trillion market in the largest and most populated continent by 2025, according to Euromonitor International, a leading independent provider of strategic market research.

From ride-sharing services to exporting online labor, South Asian nations like India, Bangladesh, and Pakistan are tapping new opportunities. This is allowing hitherto excluded sections to find new pastures. So, the rush of new users is unusually high.

In South Asia, India and Bangladesh, with a penetration rate of 29 percent and 22 percent, respectively, are the highest-ranking nations.

Asian governments see the radical digital makeover of its citizens as not just desirable, but a necessity.  The communist nation of Vietnam has set a target to hike the gross domestic product (GDP) share of the digital economy to 20 percent by 2025.

Asian governments believe by creating a robust digital society, people will become happier, can take part in social activities in a more comprehensive way, can enjoy social security policies favorably, and can make them safer and more humane.

If the pope chided neoliberalism, which advocates the digital economy, for its throwaway culture earlier, this time the supreme pontiff has turned his attention to transhumanism and its digital ecosystems, which aim to radically alter human nature with super-intelligence and better emotional well-being by means of technological advancement while challenging physical boundaries and organic biological limitations.

To make it happen and to make society more abstract, people have to be placed behind computer screens and cell phones, looking for information (conceived as data). From Apple and Google to Facebook, giant tech firms with budgets as high as many Asian nations are doing exactly that.

It promises to alleviate afflictions and sufferings and to make humanity stronger, more intelligent, and godlike — an eternal existence of life through the insemination of machine intelligence into human bodies.

The pope knew that this fusion with technology comes with a lot of strings attached. Because to transcend human limitations humanity has to give up the essence of being human.

As the machine world spreads its wings, it will be hard for humans to be present in their own bodies and lift their eyes to look at others.

Everything is a game on this altar of transcendence, which is a culture that worships youthhood. With a gospel of machine supremacy preaching perfection, the great tragedy will be humanity’s free will, which is a prerequisite to developing a conscience.

Pastoral care in Asia, as Pope Francis says, should help Asians lift up their eyes to see others. It needs to be a balancing act because it is practically impossible to undo or arrest the cyber tech development projecting its pitfalls.

The new mission is Asia also should develop effective ways to fight the sins and crimes developing among the younger generation, making them realize how the new economy makes them its victims and how their productive time, and therefore their future, is sinfully wasted.