Making sense of the Catholic congress in China

Changes are afoot at the Communist Party’s official church bodies, including the first senior appointment of a laywoman 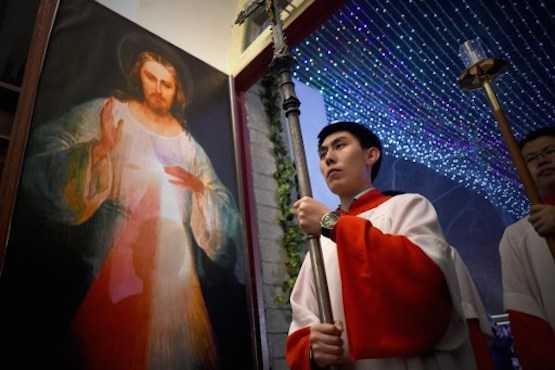 Young Chinese worshippers attend Mass at a Catholic church in Beijing in this file photo. (Photo by AFP)

The Chinese Communist Party's Ninth Congress of Catholic Representatives closed in Beijing on Dec. 29 after three days during which the 365 participants "elected" new leaders and amended the constitutions of the two government-sanctioned national church bodies in the open church community.

The congress is held once every five years but was delayed by a year due to China-Vatican talks. The amendments to the constitutions are expected to be officially released later this month.

While many of the newly elected leaders are actually old faces having been in some leadership capacity before, this does not mean things will remain the same.

Three new faces and a reshuffle of posts between the Chinese Catholic Patriotic Association (CCPA) and the Bishops' Conference of the Catholic Church in China (BCCCC), each tells a different story.

Bishop Yang Yongqiang of Zhoucun is a new member of the bishops' standing committee. Ordained in 2010 with dual approval from the Vatican and the Chinese government, he is not a particularly outstanding person. So his election appears to be connected with his native province of Shandong.

That is where the layman Anthony Liu Bainian, 83, emerged from the open church hierarchy in 1952. Liu was a representative of the First Congress in 1957 and has remained a member since then, gathering and wielding such immense influence that he was long been dubbed the "Black Pope of China."

In the 2010 congress, he was named "honorary president of the CCPA and BCCCC" along with Shanghai's late Bishop Aloysius Jin Luxian, perhaps modern China's most outstanding church leader.

Liu's new title is inclusive of both organizations, placing layman Liu above the bishops. No wonder the Vatican has particular trouble with the congress and official church structure.

Liu's influence became apparent from constant stories that any person who had ambitions to be ordained a bishop would need his blessing.

Officially, Liu retired a few years ago and his honorary title was not mentioned in the Ninth Congress. Yet one can see him still sitting in the front row on the stage, among the panel of leaders at the congress.

Bishop Fang Yingxao of Linyi was re-elected as the president of the CCPA and with Bishop Yang in the bishops' conference, there is now one Shandong bishop in each of the national church bodies, manifesting Liu's influence.

It was no surprise that excommunicated Bishop Lei Shiyin of Leshan was re-elected to the CCPA. Also noteworthy is that Bishop He Zeqing of Wanzhou (Wanxian) was newly elected into the bishops' standing committee.

Leshan is a diocese in southwestern Sichuan province. Wanzhou is one of the two dioceses in Chongqing municipality that was carved out of Sichuan since 1997.

Lei has been a CCPA vice president since 2005. The Vatican excommunicated him when he received his episcopal ordination without papal approval in 2011. But he is a "legitimate bishop" in the eyes of the Chinese government.

Customarily, a bishop would be sent from the CCPA or bishops' conference to attend an episcopal ordination. Being the most senior church official in Sichuan because of his post in the national church body, Lei became the natural representative. So Lei participated in the recent episcopal ordinations in Chengdu and Xichang, both in Sichuan, to the dismay of the Vatican.

The upshot of all this is, that with Bishop He becoming a leader in a national church body, he is now in a position to substitute for the excommunicated bishop in any episcopal ordination in southwestern area in future under improved China-Vatican relations.

Of course, it would be vice-versa if relations take a turn for the worse.

Fujian steps up as a model province

Lastly, the open church in China now has two leaders from the wealthy coastal province of Fujian province: Bishop Zhan Silu of Mindong, who was ordained without papal approval, was re-elected into the bishops' standing committee; and Shi Xueqin, the first laywoman to be elected as vice president of the CCPA.

The government's support of Bishop Zhan is apparent. In June, Politburo member Sun Chunlan — arguably China's top female leader — met with Zhan when she made an inspection trip to Fujian. Sun is the head of the powerful United Front Work Department, the Communist Party's organ to oversee religions and Chinese abroad.

In the press statement from the State Administration for Religious Affairs on Dec. 29, Bishop Zhan name was second in a list of 17 new vice presidents of the CCPA and bishops' conference. In China, these things matter.

The election of laywoman Shi was not an echo to Pope Francis' call for greater role of women in the church but had been previewed in another inspection trip led by Zhu Weiqun, head of a committee for religious and ethnic affairs under the Chinese People's Political Consultative Conference.

The delegation recommended in a report of the September trip that religious personnel in Fujian had "political awareness and with religious knowledge, morality and noticeable performance" and should be appointed to "positions of at least vice secretary general in national religious bodies."

Perhaps Fujian is emerging as the model for the continued Sinicization of the church promised by Party leader Xi Jinping.