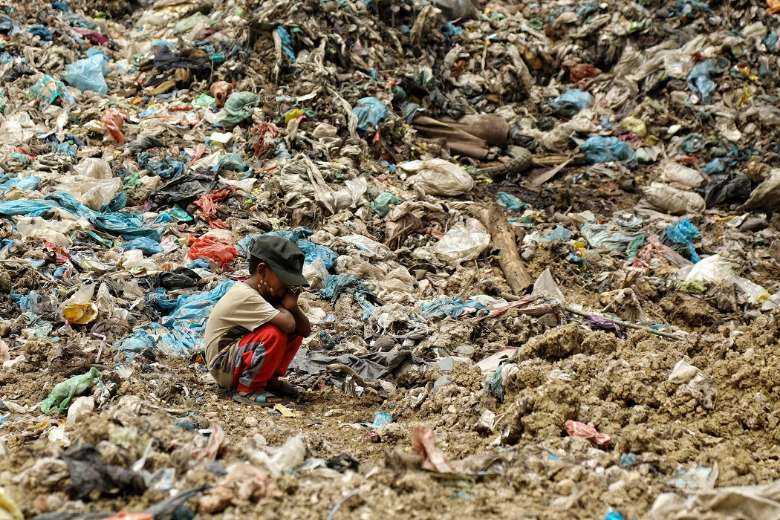 The son of a garbage collector rests as his father (not pictured) looks for items that can be resold at a landfill site in Alue Liem in Lhokseumawe, Indonesia, on Sept. 15. (Photo: AFP)

Despite the pandemic having gradually subsided, with a smaller number of new daily cases, its deep impact on the lives of most Indonesians, particularly the poor and marginalized, is far from over.

A series of natural disasters have further deteriorated the quality of life, inflicted additional loss of life and property, and prolonged trauma on people.

The immensity of suffering caused by the pandemic and natural disasters has become the primary concern of Catholic and Protestant leaders who put it at the heart of their joint Christmas message.

The message, with the theme “Christ’s Love Moves Fraternity,” was signed by Cardinal Ignatius Suharyo Hardjoatmodjo, president of the Indonesian Bishops' Conference, and Rev. Gomar Gultom, president of the Union of Churches in Indonesia.

It urges Christians to continue helping others affected by the pandemic and reminds them of the meaning of Christmas as a celebration of God’s loving solidarity with humanity, in all its simplicity.

Love, solidarity and simplicity are at the heart of Christmas. The Gospels of Matthew and Luke tell us that Jesus was born in an inhospitable, unworthy place for a king, surrounded only by his parents, Mary and Joseph, and a group of shepherds.

Both the encyclical and document promote interfaith tolerance, peace, and communal healing in all circumstances of living together

Indonesian Christian leaders wanted to emphasize the humble nuance of the first Christmas and keep it relevant with the reality of millions of people left devastated by the pandemic.

For Catholics, it’s a reminder of Pope Francis’ 2020 encyclical Fratelli Tutti, on fraternity and social friendship. On Dec. 15, the 85-year-old pontiff launched a new foundation named after the encyclical to promote dialogue among cultures and other religions to build a social alliance.

It's also a further application of the Document on Human Fraternity for World Peace and Living Together, also known as the Abu Dhabi Declaration, signed by Pope Francis and Sheikh Ahmed el-Tayeb, grand imam of Al-Azhar, during a papal visit to the United Arab Emirates in early 2019. This document was well received by major Indonesian Muslim groups and become a reference for interfaith actions.

Both the encyclical and document promote interfaith tolerance, peace, and communal healing in all circumstances of living together, including facing difficult situations such as those resulting from the pandemic.

Indonesia’s economy is slowly emerging from the rubble caused by Covid-19, but it may not immediately cure the problems of unemployment and poverty.

Covid-19 has infected nearly 4.3 million Indonesians and killed around 144,000. Globally, it has infected more than 273 million and caused over 5.3 million deaths.

More than nine million Indonesians have lost their jobs, leaving around 27 million in poverty, according to the national statistics agency.

However, the Social Affairs Ministry, which hands out assistance to people, said that around 74 million Indonesians are trapped in poverty and need serious help from the government and communities.

Natural disasters such as floods, landslides and forest and land fires have killed around 600 people this year, including in the Christian-majority East Nusa Tenggara province that was hit by floods and landslides in April.

These natural emergencies have displaced more than 700,000 people and damaged thousands of homes and buildings, leaving many struggling to recover.

Around 10,000 people remain at refugee centers due to the Mount Semeru volcano eruption in East Java on Dec. 4.

The Papuan Church Council reported that at least 60,000 residents in six districts were displaced over the last year due to the conflict between the Indonesian security forces and Papuan armed separatists. Many people have died.

The exploitation of nature only benefits a small group of people, while the negative impact of deforestation or mining is felt by a majority of people

In their message, the Catholic and Protestant leaders likened the situation of present-day Indonesia with the suffering of Christians in Asia Minor — now Turkey — to whom St. Peter the Apostle wrote his first letter to motivate them.

Christianity composes around 10 percent or 26.9 million of Indonesia’s total population of 270 million. According to Global Religion Futures, it is among the top 30 countries in terms of the number of Christians.

Despite facing challenges, such as difficulties in building churches or issues of Christianization, Christians are encouraged to continue building bridges with others in the Muslim-majority nation.

The call for solidarity should not be perceived as only caring for fellow humans but also nature. The disasters that have rocked Indonesia in recent times such as floods, landslides, droughts, tsunamis, even the Covid-19 pandemic, should not be viewed solely as natural disasters. Experts have said that most of these disasters are related to human error.

During a recent discussion on environmental politics and climate change, Ismid Hadad, a senior researcher at the Institute for Economic and Social Research, Education and Information, said the natural calamities that hit Indonesia in recent years were a result of irresponsible and exploitative activities against natural resources.

The exploitation of nature only benefits a small group of people, while the negative impact of deforestation or mining is felt by a majority of people. It's in this context that this call for solidarity by Christian leaders is relevant.

Christians are challenged to jointly fight against any form of exploitation of people and the environment and strive together to seek development that promotes human dignity and preserves nature.