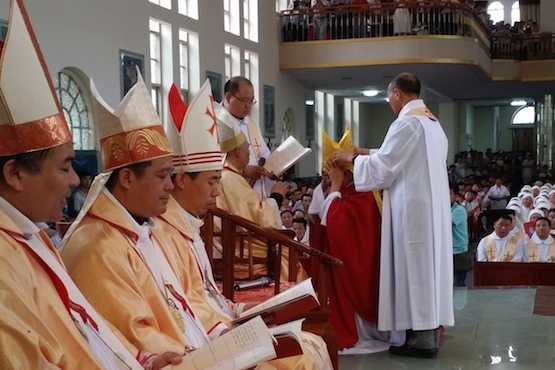 The latest statistics of the Catholic Church in China compiled by Hong Kong Diocese's Holy Spirit Study Centre shows the number of "open" bishops or those recognized by the government is more than double that of those from the unrecognized or "underground" community.

The 2016 Spring issue of Tripod, the center’s quarterly journal, has released a series of statistics on the Catholic Church in China for 2015. According to Tripod, there are 112 bishops in mainland China. Among them, 99 are in ministry while 13 are not.

"Not in ministry means the bishop has retired or was forced to retire," Anthony Lam Sui-ki, executive editor of Tripod, told ucanews.com. The 2015 figure showed that there are 70 bishops for the open church community, 11 more than in 2014. For the underground community, there are 29, a drop of 13 compared to 2014. According to reports, only Coadjutor Bishop Joseph Zhang Yinlin of Anyang was ordained and Bishop Martin Wu Qinjing of Zhouzhi was installed in the open church in 2015. Some of the other nine bishops newly counted as open bishops previously belong to the underground church, Lam explained. "Some bishops no longer think they are underground, so we count them as belonging to the open community," he said. However, he refused to disclose who they were.

An underground bishop getting government recognition means they have agreed to be managed by the government.

Declining vocations Lam pointed out that religious vocation in the church in China is declining as shown from the number of priests, nuns and seminarians. According to 2015 figures, there are 2,500 priests and 3,170 nuns in the open church, a decline of 100 priests and 80 nuns on 2014. As for the underground church, there are 1,300 priests and 1,400 nuns, a decrease of 100 and 130 respectively. The open church has nine seminaries across China. The number of seminarians dropped from 560 to 425. The underground church presently has ten seminaries with the number of seminarians declining from 300 to 200 between 2014 and 2015. However, there is a significant change in minor seminaries in the open church with a sudden increase of 11 to 20 within the past year. "The number of minor seminaries is always controversial. People may argue with the nature of some of these seminaries," said Lam.