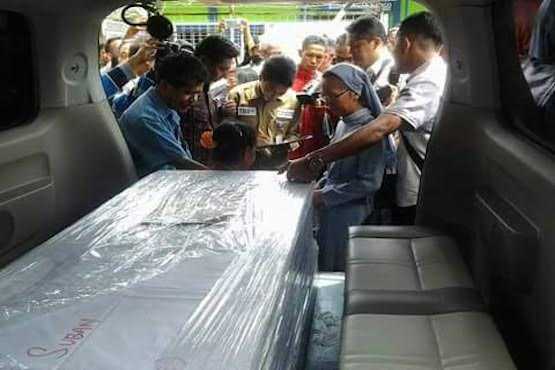 The death of a 21-year-old Indonesian maid, allegedly at the hands of her violent employer in Malaysia, has reignited calls by migrant groups and activists for the government to provide better protection for overseas workers and crack down on traffickers.

Adelina Jemira Sau from Indonesia's predominantly Christian East Nusa Tenggara province died in a Penang hospital on Feb. 11 after being rescued from her employer's house a day earlier by a migrant workers' protection group.

She was buried in her home village in South Central Timor district on Feb. 19.

Sau was the ninth migrant worker from the province to have died this year, according to Migrant CARE.

Last year, the group recorded 62 migrant deaths. One was a documented migrant worker, the rest were working illegally. The figures highlighted concerns voiced by labor and rights groups about human trafficking and a lack of protection even for documented workers.

"Despite the government signing the ASEAN Consensus on the Protection and Promotion of the Rights of Migrant Workers, bad things are still happening," he said.

"The government must take preventive action by providing villagers with adequate information about how to be safe migrant workers and by minimizing the space for illegal recruiters."

He also demanded the government to conduct investigations against any individual, corporation or even government official allegedly involved in human trafficking.

He accused the government of not lifting a finger to provide people, especially impoverished areas like East Nusa Tenggara with skills training that would allow them to either remain at home or pursue a more legitimate or safer line of work if they go abroad.

He said there are three official private employment companies in the province.

"But there is no vocational training center where applicants can learn skills."

He acknowledged that economic problems were the main driver behind human trafficking and migration in East Nusa Tenggara, with 20 percent of its 4.9 million people living below the poverty line.

The International Organization for Migration said the province has the highest number of human trafficking cases in Indonesia. There have been at least 7,200 trafficking victims from the province, 82 percent of them women.

Many, like Sau were smuggled to other countries by agents on forged documents.

Ambrosius Ku, a spokesman for Sau's family, said a woman took her away in August 2015 and that all her documents were forged. The documents made out that Sau was six years older than she actually was, Ku said.

A candlelit vigil was held in front of the governor's residence in the provincial capital Kupang to remember Sau and press the government to end human trafficking in the province.