Woman claims she was trafficked as a child, confined and suffered years of abuse from employer who refused to pay her Afra Burga Ambol receives treatment in hospital after she says she was physically abused by her employer in Cengkareng, West Jakarta, on Oct. 21. Her lawyer says she has suffered years of abuse. (Photo supplied)

A Catholic domestic worker has filed a police complaint in Indonesia accusing her employer of treating her as a slave.

Afra Burga Ambol, 24, claims her employer, Fredy Burhan, refused to pay her and beat her frequently at his home in West Jakarta for years.

The domestic worker, who comes from predominantly Christian East Nusa Tenggara province, said she lodged the complaint after escaping from Burhan’s house on Oct. 21 and sought help at the nearest police station.

Hipatios Wira Labut, a lawyer who has taken up Ambol’s case, said she fled after Burhan hit her around the head with a broom for not cleaning his house quickly despite her being sick.

Such treatment has gone on since Ambol started working for him in 2011 when she was still 15 years old, the lawyer told reporters.

Labut said she often endured verbal abuse as well as physical violence that involved her being kicked and beaten with sticks, a broom handle or piping.

"She was helpless and could not report such abuse earlier because she was prevented from leaving the house or use any device to communicate with the outside world," Labut said. “She was also not paid during all this time.”

Prischa Leda, a friend who traveled to Jakarta to be with Ambol when her family was informed by police, said Ambol left her village in East Manggarai district on Flores Island after being lured to work in the capital by a recruiter who offered a large salary.

"She left without proper documents and without the knowledge of the family. Her family only learned that she was in Jakarta after this case surfaced,” she said.

Antonius, a police investigator in Cengkareng, West Jakarta, said they had arrested and detained Burhan after he admitted the accusations against him. He could face five years in prison and/or a fine of US$1000. Establishing the rights of victims of human trafficking and migrant smuggling 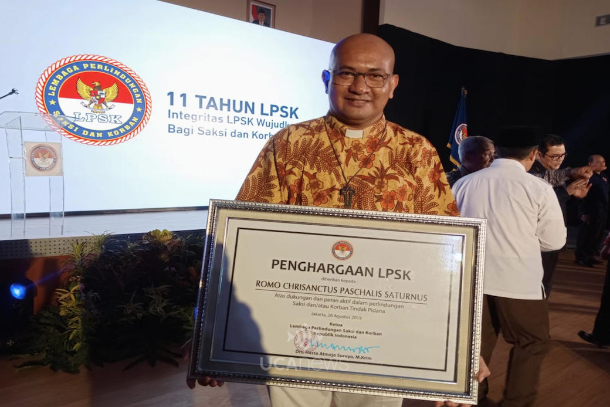 Gabriel Sola from Advocacy Services for Justice and Peace, a church-affiliated group, called on police to also go after those responsible for recruiting Ambol.

"She was a child worker and there are very strong indications she was a victim of trafficking,” he told ucanews.

Lita Anggraini, a coordinator of the National Network for Domestic Worker Advocacy, said Ambol’s case highlighted the abuse that domestic workers still have to endure.

As of August, the group had recorded 245 complaints related to unpaid wages, physical violence and human trafficking this year. Much of this can be attributed to the absence of laws to protect them, she said.

“A domestic workers bill first proposed in 2004 has not even been discussed yet,” Anggraini said, calling on the country’s newly installed legislators to address the issue promptly.