Former Malaysian prime minister Mahathir Mohamad delivers a speech after he was elected as the opposition's prime ministerial candidate during the four-party coalition Pakatan Harapan convention in Shah Alam on Jan. 7 (Photo by Mohd Rasfan/AFP)

The 92-year-old chairman of Pakatan Harapan, a coalition of opposition parties, was officially named as its prime ministerial candidate on Sunday at the close of its convention.

Fully aware many Malaysians view him with deep reservations, he said: "I am very much indebted to Anwar (Ibrahim) and thank him for being willing to work with the team, including me, to save the country."

The acknowledgement of his one time protege and deputy prime minister, whom he sacked in the late 1990s over economic policy and had imprisoned on charges of sodomy and graft, was greeted with a roar of approval.

"I realize how Anwar feels, particularly when he was sent to Sungai Buloh (prison) during my time,” he said.

“It is not easy for him to accept me."

With Anwar in prison, Mahathir is seen as the biggest threat to Prime Minister Najib Razak, who is engulfed in the 1Malaysia Development Berhad (1MDB) sovereign wealth fund corruption scandal.

Apart from being set to become the world’s oldest leader if the opposition wins, a victory could also potentially pave the way for Anwar to become the prime minister.

If the opposition wins, the component parties have agreed to immediately start the legal processes to obtain a royal pardon for Anwar so that he could immediately play a role in the federal government and subsequently be proposed as a candidate for prime minister, he said. Politics, piety and control in Malaysia 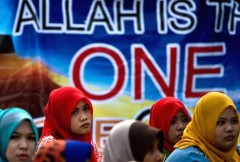 A 'horrible' year all round for Malaysians

The Mahathir-Anwar coalition and their endorsement of each other is a turnaround from their bitter feud that has shaped Malaysia’s political landscape for nearly two decades.

Anwar's conviction and nine-year prison sentence that he received in 1999 were overturned in 2004 and he was released.

He led the opposition to significant electoral gains in the last general election in 2013.

Najib’s Barisan Nasional coalition lost the popular vote in that election but managed to stay in power after winning a majority of the seats in parliament.

But Anwar was convicted and jailed again in 2013 for allegedly sodomizing a former aide, a charge he and his supporters describe as an attempt to end his career.

The conviction disqualifies Anwar from political office for five years. A royal pardon, however, would let him contest.

Opposition to Prime Minister Najib has brought Anwar and Mahathir back together, with their parties — Parti Keadilan Rakyat and Bersatu respectively — now working in the opposition coalition.

Najib has been embroiled in a corruption scandal involving the 1MDB state fund that lawsuits filed by the US Justice Department allege was embezzled of about US$4.5 billion.

The fund has denied any wrongdoing.

And Najib, who founded 1MDB and has denied all allegations of corruption against him, was cleared of wrongdoing by Malaysia’s attorney-general.