The 2022 Awardees have strived for making societies better, kinder, and more equitable for everyone' 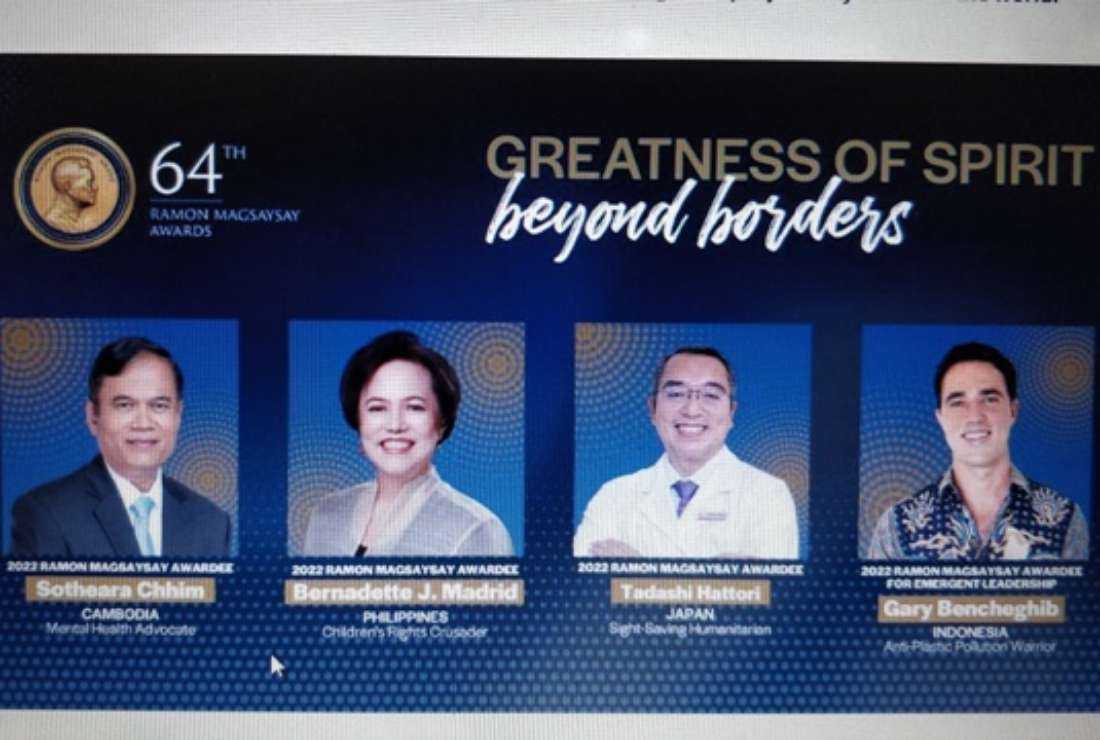 Four people working for the Asian poor and the environment have been selected for this year's Ramon Magsaysay Award, dubbed the “Asian Nobel Prize.”

The Ramon Magsaysay Foundation announced the names of the winners on Aug. 31.

The foundation said this year's winners "have shown moral courage and impassioned insistence on making the societies that they serve better, kinder and more equitable for everyone, especially for the marginalized."

"Indeed, they offer us inspiring examples of vision, leadership, empathy, persistence, and Greatness of Spirit," the foundation said in the official statement.

Chim, a mental health advocate from Cambodia, has been selected for the award for being "a leading voice" in Cambodian trauma syndrome, particularly for the victims of the genocidal Khmer Rouge regime.

Chim was only seven when Khmer Rouge took over Cambodia in 1975 and forced people in Phnom Penh and other cities to rural camps for slave labor and re-education.

Chim, like other children, was separated from his parents to work in a camp. More than three years later Chim was reunited with his family when Phnom Penh was liberated in 1979.

He studied medicine and graduated from Phnom Penh’s University of Health Sciences. In 2002, he assumed a leading role in mental health as executive director of Cambodia’s Transcultural Psychosocial Organization (TPO). It is now the largest non-government organization in the field of mental health care and psychosocial support in Cambodia.

Chim was recognized for “his calm courage in surmounting deep trauma to become his people’s healer; his transformative work amidst great need and seemingly insurmountable difficulties, and for showing that daily devotion to the best of one’s profession can itself be a form of greatness,” the foundation said.

Hattori worked in hospitals in Japan after graduating from Kyoto Prefectural University of Medicine in 1993. In 2002, he visited Vietnam's Hanoi for the first time and found cataract blindness was prevalent in the country amid a dire lack of eye specialists and up-to-date treatment facilities.

The experience moved him and on his return to Japan, he used his savings to buy medical equipment to donate and started visiting Hanoi almost every month.

The foundation recognized him for “his simple humanity and extraordinary generosity as a person and a professional; his skill and compassion in restoring the gift of sight to tens of thousands of people not his own; and the inspiration he has given, by his shining example, that one person can make a difference in helping kindness flourish in the world.”

Madrid is a Filipino doctor and the executive director of the NGO Child Protection Network Foundation, which supports the training of child protection professionals and the development of women and child protection units in the Philippines.

The foundation says it recognized Madrid's "transformative work" in integrating child protection into the health infrastructure in the Philippines and noted that she has been at the forefront in providing medical, legal, and psychosocial care to children and women who are victims of abuse.

She is being honored for “her unassuming and steadfast commitment to a noble and demanding advocacy; her leadership in running a multisectoral, multidisciplinary effort in child protection that is admired in Asia; and her competence and compassion in devoting herself to seeing that every abused child lives in a healing, safe, and nurturing society.”

Gary Bencheghib, 27, an Indonesia-based French filmmaker and environmentalist, has been selected for his efforts in saving the Citarum River, one of the most polluted rivers in the world. He and his brother Sam have made kayaks made of plastic bottles and bamboo to collect trash from the river. Their efforts gained the attention of Indonesian President Joko Widodo.

The foundation said it recognizes Gary’s Emergent Leadership for “his inspiring fight against marine plastic pollution, an issue at once intensely local as well as global; his youthful energies in combining nature, adventure, video, and technology as weapons for social advocacy; and his creative, risk-taking passion that is truly a shining example for the youth and the world.”

While announcing the 2022 awards, Aurelio R. Montinola III, chairperson of the Ramon Magsaysay Award Foundation, said: “This year’s roster of Magsaysay Awardees have all challenged the invisible societal lines that cause separation and have drawn innovative and inspiring ones that build connections.”

The Ramon Magsaysay Award was established in 1958 in memory of the third president of the Philippines. Each year it honors individuals and organizations in Asia who transform lives and societies by manifesting “selfless service.”

The winners will formally receive their awards during a ceremony in Manila on Nov. 30.