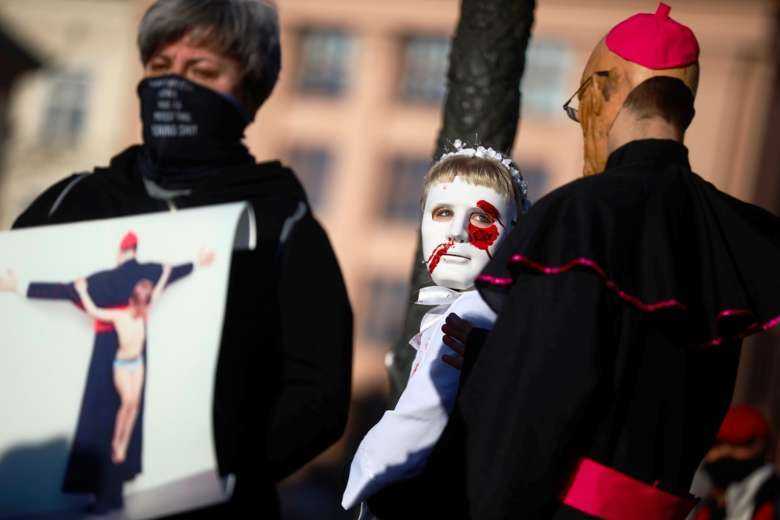 Activists perform in a happening against members of the Catholic Church hierarchy who had been covering up sex scandals in Krakow, Poland, on Dec. 6, 2020. (Photo: AFP)

Panchjanya, a weekly magazine linked to the Rashtriya Swayamsevak Sangh (RSS), has sought an inquiry into the Indian Catholic Church and its clergy while citing the recent expose of child sexual abuse within the French Church.

In its latest issue, which will hit the stands on Oct. 17, the magazine has reportedly published a cover story on the sexual exploitation of children and nuns by priests across the world.

Panchjanya, published in Hindi to uphold Hindu patriotism in keeping with the objectives of the nationalist RSS, has claimed that incidents of sexual exploitation of children and nuns are on the rise in India too.

Referring to the reported incidents of rape of a woman in a missionary college in Chennai and a nun from Kerala, the magazine has said the people of the country wanted a probe against the Church and its priests.

Detailing the inquiry that unearthed the scale of abuse within the French Church, the magazine termed the earlier apology by Pope Francis in 2019 for such incidents a “formality under pressure.”

It went on to question and blame the style of functioning of the Church for the declining number of religious nuns across the globe. A similar trend was witnessed in the southern Indian state of Kerala and so the Church was targeting girls from poor families in underdeveloped states such as Chhattisgarh, Jharkhand, Himachal Pradesh and Odisha, the magazine alleged.

A.C. Michael, a human rights activist and former member of Delhi Minorities Commission, said that “the Catholic Church has its own mechanism to handle such cases and has never shied away from taking action.”

His only concern, he said, was that when such statements are made they should be based on facts. “Let me remind my friends in the RSS that the incidents they have quoted are investigated and tried in various courts in India,” Michael added.

He said all were equal before the law and the Supreme Court of India has made it amply clear by intervening in such matters in the past, as it has in a recent case involving the son of a junior federal minister arrested for allegedly murdering farmers.

“If one has committed a crime even if one is a priest or minister, he should be investigated and if found guilty be punished as per the law of the land,” Michael said.

He also sought to remind the accusers that the Church had never disowned or defended errant priests as the RSS did “in the case of Nathuram Godse [Mahatma Gandhi’s killer].”