Pope Francis smiles during an international meeting to celebrate the 50th anniversary of the Neocatechumenal Way at Tor Vergata, a suburb of Rome, on May 5, 2018. (Photo by Tiziana Fabi/AFP)

A new seminary to train priests for the whole of Asia will open in the Chinese territory of Macau in September.

The Congregation for the Evangelization of Peoples has entrusted management of the Redemptoris Mater College for Evangelization in Asia to the Neocatechumenal Way.

The seminary was established by a decree signed by Cardinal Fernando Filoni, prefect of the Vatican-based congregation, on June 29 after an audience with Pope Francis, according to an Agenzia Fides report on July 29.

Cardinal Filoni said the college is "the fruit of apostolic creativity that looks to evangelization in that continent and expresses a will of decentralization of the congregation.”

The Neocatechumenal Way has long-standing experience of forming priests for the mission in Asia, he said.

He said the new college’s “specific nature is to take care of the formation for missionary priests who will have the evangelization in the territories of Asia at heart.”

The choice of Macao, a former Portuguese colony returned to China in December 1999, is linked to its history as a gateway for Jesuit missionaries such as Matteo Ricci, Francis Xavier and Alessandro Valignano who passed through it before going to China or Japan.

The seminary intends to respond to the call of Pope St. John Paul II’s 1990 encyclical Redemptoris Missio (the mission of the Redeemer), which identifies the Asian continent as a territory where “the Church’s mission ad gentes ought to be chiefly directed.”

It is also a response to the call of Pope Francis, who in his apostolic exhortation Evangelii Gaudium invites the Church to "go forth" to always proclaim the Gospel.

Cardinal Filioni said Macau “has historically represented the door or a bridge for the mission of the Church in the East and as a promoting center for evangelization in the Far East.” 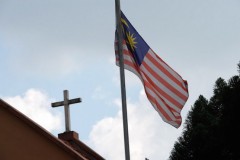 Bishop Stephen Lee Bun-sang of Macau has accepted the congregation’s request to host the new college. However, appointments and authority will remain the direct prerogative of the congregation, which, according to the Second Vatican Council, has the task of promoting evangelization in the world.

The Neocatechumenal Way was founded in Madrid, Spain, in 1964. It is estimated there are more than 100 Redemptoris Mater seminaries, 40,000 communities and a million members across the world.

Archbishop Tarcisius Isao Kikuchi of Tokyo said last August that he had received a letter from Cardinal Filoni unilaterally announcing that the seminary would be established somewhere in the archdiocese.

Archbishop Kikuchi expressed surprise that senior clergy in Japan including himself had not been brought in for discussions on the matter.

However, in a statement last month he said he had received a letter dated June 17 from Cardinal Filoni saying that the congregation had decided to review the project to establish a Tokyo-based seminary.

“Cardinal Filoni, a supporter of the Neocatechumenal Way, gave up the Tokyo project. So, I guess, the new Macau seminary is a replacement for the disappeared Tokyo project,” a Japanese source from Tokyo who asked not to be named told ucanews.com.

The source said a Redemptoris Mater seminary was established in 1990 in Takamatsu Diocese as a diocesan institute but it closed in 2009 after a conflict with local laypeople about the financial burden it caused. “The Neocatechumenal Way caused many troubles to Japan,” the source said.