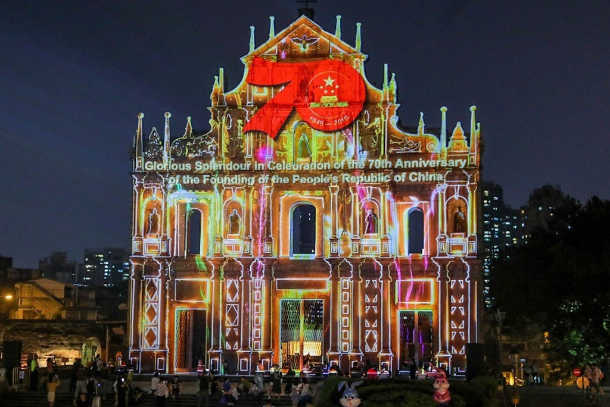 The mapping show that was projected onto the Ruins of St. Paul’s for China’s National Day. (Photo from MGTO Facebook)

The Macau Diocese says its members are far from happy with the Chinese flag and national emblem being projected onto the Ruins of St. Paul’s during the celebrations of China’s National Day.

They say the contents of such performances should have been related solely to the historical monument’s religious background.

The Chancery Office of the diocese released a statement on Oct. 2 in response to a controversial mapping show called “Glorious Splendor in Celebration of the 70th Anniversary of the Founding of the People’s Republic of China” at the “Facade of the Church of the Mother of God.” The site is more commonly known as the Ruins of St. Paul’s.

The light show was presented by the Macau Government Tourism Office (MGTO) for three consecutive nights from Sept. 29, taking place every 15 minutes on each night, from 8-10 p.m. on the first night and from 7-10 p.m. on the other two days.

During each show, several Chinese national symbols were projected, including Tiananmen Square in Beijing, as well as statements celebrating the 20th anniversary of Macau’s return to “the motherland” and China’s 70th National Day.

The show evoked widespread reaction and discontent after projecting the Chinese flag and national emblem onto the facade of the 17th century ruins.

The diocese’s statement wrote that the Ruins of St. Paul’s was not only a landmark of the city but also rich in historical and religious significance.

It said that although the facade was no longer church property, it remained “a symbol of the Catholic Faith in Macau, the faithful of different nationalities shares deep feelings and recognition on it.”

It also mentioned that the show evoked discontent from faithful of different nationalities because “the use of the historical monuments ought to correspond to its intended character.”

The diocese proposed that if other mapping shows were held in the future, their contents “would do well to be related to the religious context of the monument.”

Politics on show for first time

It also expressed its willingness to communicate with relevant departments to exchange views and jointly preserve and promote precious historic relics in Macau.

A faithful of the diocese, Luis Leong, told ucanews.com that the government has been organizing mapping shows for some years but had previously avoided causing offence.

Previously the contents of projections were equally controversial but at least had a cultural theme, so the opposition and resentment were not so intense, he said.

This year’s content had been more political, he said, and thus justified the discontent and even anger that it had provoked. He and many other faithful also found it “obviously not respectful.”

He also pointed out that even after hostility to the light show appeared online the Macau government made no effort to alter or halt it.

He added: “After all, if mainland China had not been unfriendly to the Catholic Church for such a long time and if we had not heard about the disappearance of priests and bishops from time to time, the incident wouldn’t have become such a big issue and received international attention.”

Leong welcomes the diocese’s decision to issue a stern statement and hoped that henceforth, relevant departments would first communicate with the diocese and seek the Church’s opinion.

Another local church member, Mr. Wong, said that although the facade was no longer church property, it had a long history in Macau and was a sacred place for the harmonious coexistence of ethnic groups in the eyes of many citizens.

He acknowledged that the site had been used for the National Day celebration but said: “Using the facade as a venue to display the symbol of political power in such pompous and undisguised way could remind people of ‘one country’ over the ‘two systems’, and the regime’s disrespect, intervention or even oppression of religion.”

He pointed out that the controversy had come amid restrictions on, and even persecution of, religious believers and activities by the mainland authorities. He believed that while “freedom of religious belief is not in immediate danger,” the fact the event was staged and the authorities took no notice of the resentment it caused sounded alarm bells.

Wong stressed that instead of taking freedom for granted, the Church and faithful should be on the alert to defend them.

“Facing an increasingly complicated situation, not only church members but also Macau society as a whole needs a more active and deeper humanistic thinking,” he said.

The Ruins of St. Paul’s is the facade of the Church of the Mother of God, where remains of a number of martyrs are buried underneath.

As one of Macau’s most famous landmarks, together with other relics in the historic district, it was inscribed on UNESCO’s World Heritage list after a lengthy campaign as a site of great importance in 2005.

This video of the light show was posted to YouTube by Antonio Cheong: