The Macau Diocesan Commission of the Family, Marriage and Life has submitted 1,500 Catholics' signatures and a written submission to the government opposing legislation on assisted reproductive technology.

It affirmed its stance objecting to artificial conception and any technologies that create life and infringe on human dignity.

Macau Health Bureau announced last November that a public consultation on the legislation would take place for 40 days from Dec. 4 to Jan. 12.

Officials said the consultation aimed to help the public understand the legislative direction and content of the relevant bills, particularly some relating to controversial ethical issues.

Bishop Stephen Lee Bun-sang of Macau told local media on Dec. 20 that assisted reproductive technology was a "Pandora's box" involving many ethical issues that required the government's careful consideration, otherwise many problems "will become out of control and have a great impact on human life."

"The diocese is only responsible for bringing ethical assessment to all," he said.

The commission organized a symposium on Jan. 4 to explain the impact of the legislation.

The nun described the church's stance on artificial insemination and related technologies as "totally unacceptable" and quoted "Donum Vitae" — the Instruction on Respect for Human Life in Its Origin and on the Dignity of Procreation — to explain that this stance was the truth of the Catholic faith, which was firm and unwavering.

Another speaker, Father Domingos Un Wai-meng, pointed out that assisted reproductive technology posed challenges to ethical relations among human beings as it involved the donation of sperm, eggs or embryos outside the couple, which eventually destroyed the natural structure of the family. The need for a child outweighs canon law ban on IVF 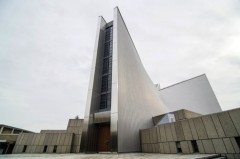 He said there was no measure at present to protect the human rights of life created by assisted reproductive technology as the law would stipulate the status of the donor to be kept confidential forever, so the child would never know his or her biological parents.

"We are opposed to human trafficking but assisted reproductive technology is another way to do this. It is a moral disorder, so we oppose it," the priest said.

On Jan. 7, the commission conducted a signature campaign in all parishes for protecting "human dignity, life value and maintenance of social ethics."