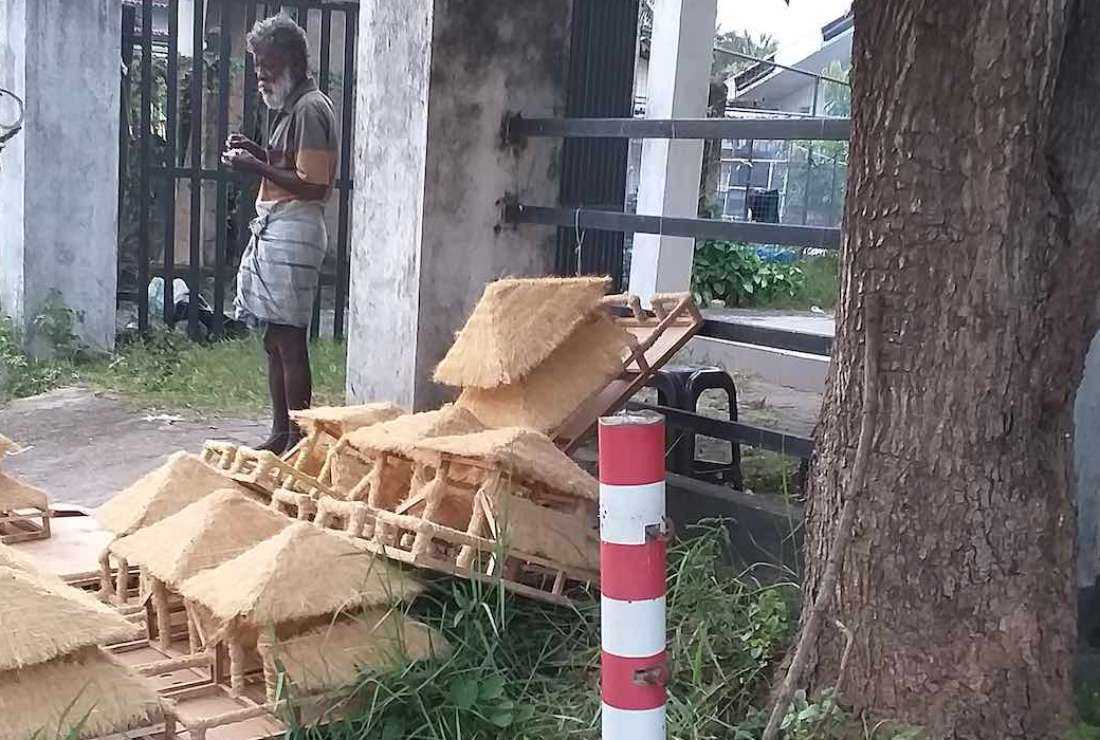 Sebastian Peter, a Sri Lankan Catholic, who sells nativity scenes on roadsides during the Christmas season, says this year business is poor because of the recession that hit the country in July. (Photo: Quintus Colombage/UCAN)

Sebastian Peter stood smoking a beedi on the side of a road near Negambo in a Catholic-dominated area just north of the Sri Lankan capital Colombo.

The wooden nativity scenes, which Peter sells every Christmas season, are arranged for sale under a mango tree on the side of the road. “Very few are buying this year,” the 58-year-old Catholic said as he stood idle. “Everyone is complaining of poor business. No one is selling enough,” he said.

Peter’s situation reflects the gloomy mood this Christmas season in Sri Lanka, where an economic crisis since July has seen the prices of basic commodities spiral, pushing people into poverty and hunger.

It is a seasonal business for Peter. “If I don’t sell enough during the season, my entire year is lost,” he said.

The recession has hit not just festivities, but made even daily life difficult, according to housewives like G. Marian, a Catholic living in Negombo. "The price of essential goods has increased threefold compared to last year. We have only limited money to buy essential goods this Christmas," said Marian, who is also a Sunday-school teacher. For Negombo Catholics, it is a tradition to buy new clothes as gifts for children and relatives. “But this year, we will not be able to give Christmas gifts,” she said. Parents like Marian will not be able to make Christmas cakes and sweets this year. The prices of ingredients for all Christmas sweets including cakes have gone up, she said. “The prices of essential stationery items for school children have increased by five times compared to last year. Of course, buying school stationery is a priority over Christmas festivities,” she added.

"The situation in this country today is very dangerous"

The government has introduced several new tax amendments in a bid to tackle the worst economic crisis since independence in 1948. The United Nations World Food Program (WFP) has warned that an estimated 6.3 million people in Sri Lanka are facing moderate to severe acute food insecurity.

According to UNICEF, around 56,000 children are suffering from severe malnutrition. The UN’s World Food Program estimates that almost 70 percent of Sri Lanka’s 22 million people are reducing meal sizes. Cardinal Malcolm Ranjith of Colombo said that most people have only one meal a day. "The situation in this country today is very dangerous," Cardinal Ranjith said in the first week of December while addressing an annual gathering of Sunday school teachers. Cardinal Ranjith called for a low-key Christmas this year by avoiding elaborate festivities and instead helping to feed the hungry. Father Srikantha Fernando, priest of Our Lady of Sorrow Parish in Kadawala said his church is also feeling the pinch after the government increased the cost of electricity, which has seen the church's electricity bills increase four times in recent months. “We cannot afford that sort of hike. We, and many other religious places, now switch off lights after 6 p.m.,” he said. Nuwani Shirani from a tea estate in Kandy said she manages to survive on two meals a day. “But it's the same thing over and again: rice and one vegetable curry.”

"It seems that children will suffer the most this Christmas"

Her family has not had meat or eggs for weeks. She did not even have the 200 rupees (about 50 US cents), to pay her family’s monthly donation to the parish.

The Catholic Bishops' Conference in a recent statement urged people to be sensitive to those suffering hardship. Marian and her colleagues worry about how they will buy school materials for their children, including uniforms and shoes when the school year opens in January. "Due to the economic problems of families, many children will stop going to school. Although Christmas is the feast for children, it seems that children will suffer the most this Christmas," she said.

Although this Christmas comes after a two-year gap because of Covid-19 lockdowns, Sri Lankan Catholics will have to forgo most festivities, she said.

"In the current economic crisis, no matter what kind of job a person has, their salary is not enough for their needs because prices have doubled or trebled but their pay is the same,” she said. "It is a challenge to provide food, housing, and clothing, which are basic needs. When that becomes a priority, festivities take a back seat,” she said.