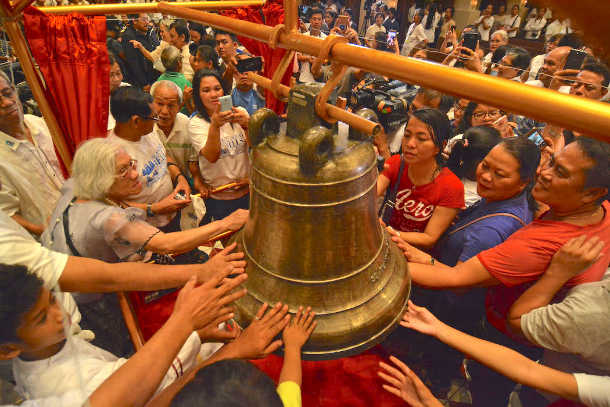 Residents of Balangiga town in the central Philippines touch one of the three historic church bells on Dec. 15 after they were returned by the United States government after more than a hundred years. (Photo by Roy Lagarde)

On Sunday, Dec. 16, residents of the sleepy little town of Balangiga woke up early for the first of the nine-day traditional dawn Masses to usher in Christmas.

The "Misa de Gallo," or "Mass of the Rooster," dubbed "Simbang Gabi (Evening Mass)" in some parts of the Philippines, is an event awaited by everyone.

In the town of Balangiga in the central part of the country, this year's celebrations are doubly special.

Oscar Badilla, 71, said he woke up early "with my heart full of gladness" to attend Mass. "Our bells are home now," he said.

For the first time in more than a hundred years, the church bells of Balangiga are ringing again.

"We waited for so long just to hear it ringing for us to go to church," said Oscar who with other residents of the town flocked to their church.

A day earlier, government and church officials brought home to Balangiga the three church bells, which were taken as war booty by American soldiers in 1901.

The taking of the bells left a painful memory to the history of the town where about 5,000 male villagers over 10 years old were killed during the war. Church leaders pose for photographs after the turnover ceremonies of the historic church bells in Balangiga town on Dec. 15. (Photo by Roy Lagarde)

"[It was] because of the fervent prayers of the entire Filipino nation," said President Rodrigo Duterte, adding that the homecoming of the bells "is truly a milestone."

The president, who has a penchant of lashing at Catholic Church leaders critical of his administration, said the return of the bells "contributes to the full restoration of our dignity as a Filipino."

The taking of the bells and the American sacking of the island of Samar in the central Philippines came after Filipino freedom fighters ambushed and killed at least 40 American soldiers sitting down to breakfast on Sept. 28, 1901.

In reprisal, the Americans rounded up and killed villagers in what later became known as the "Balangiga Massacre." A nun peers into the remains of residents of Balangiga town who were killed during the Philippine-American War in 1901. (Photo by Roy Lagarde)

Two of the bells were kept at F.E. Warren Air Force Base outside Cheyenne, Wyoming, while the 9th U.S. Infantry Regiment in South Korea kept the third.

U.S. Deputy Assistant Secretary of Defense Joseph Felter greeted the villagers with a "Merry Christmas" as he presented the bells to a crowd gathered in the town square on Dec. 15.

"We hope you will ring in the church of Balangiga once again uplifting and gracing us all with the voices of our better angels," said the American official.

The bells arrived in Manila on Dec. 11 after they were transported by "The Spirit of MacArthur," a plane named after U.S. General Douglas MacArthur who led the liberation of the Philippines from Japanese occupation during the Second World War.

"MacArthur famously kept his promise to return to the Philippines. This week ... MacArthur returned again, this time with the bells," said Felter.

Bishop Crispin Varquez of the Diocese of Borongan said the bells "bridge us to God and to one another."

"We will do everything we can so that these bells will not be separated from us again," said the prelate. "Never again, Balangiga, these bells will be taken away from you," he told the townsfolk. Nuns walk in front of the Catholic church of Balangiga town in the central Philippine province of Easter Samar. (Photo by Roy Lagarde)

Local historian Rolando Borrinaga said the repatriation of the bells should pave the way for an "unapologetic manner" of celebrating the victory of Filipinos during the war.

"We will celebrate as a victor. We won against a powerful enemy, we won against ourselves and our limitations," he said.

A fourth-class municipality in Eastern Samar province, Balangiga has a population of about 14,000 mostly Catholic residents.

Jodilyn Viala, 15, said she looks forward to the development of her town that, she said, has become "known in the entire world" because of the journalists and tourists coming for the bells.

"I only heard about the bells from the stories of my family, but today, it is already for real," she said.

Another student, Maria Ellamy Magaan, said she has "mixed feelings" over the return of the bells.

"I am sad knowing that many people died because of the bells, but I am also happy that they are now back in our town after," she said.