A woman stands by a tent at a temporary shelter in the village of Menangga Baris on Indonesia's Lombok Island in this Aug. 22, file photo. Religion-based aid groups are being warned against proselytizing among thousands displaced survivors of a series of quakes that recently hit the region. (Photo by Fred Dufour/AFP)

Indonesia's religious affairs minister has warned volunteers from religious-based organizations against proselytizing while offering aid to survivors of deadly earthquakes that recently struck the tourist island of Lombok.

In the video, volunteers were seen offering trauma healing to children and a woman sprinkling water over them, which sparked accusations the workers were trying to baptize them.

The region was hit by three powerful quakes on July 29, Aug. 5, and Aug. 19, which killed hundreds of people and displaced thousands more.

Aftershocks are continuing to rock the area in West Nusa Tenggara province.

"A humanitarian mission should be free from apostasy attempts or the introduction of a religion which is different from the one adhered to by people affected by a disaster," Religious Affairs Minister Lukman Hakim Saifuddin said in a statement on Sept. 3.

Nearly 97 percent of the province's 5 million population are Muslim. The rest include Hindus, Buddhists, Protestants and Catholics.

The minister also cited a call from Humanitarian Forum Indonesia (HFI), a network of humanitarian organizations that includes Caritas Indonesia and the Muhammadiyah Disaster Management Center, stressing the principles of humanitarian accountability such as providing non-proselytizing assistance.

"This call must be abided by," said Saifuddin, urging all aid workers to focus on assisting others regardless of their religious backgrounds. 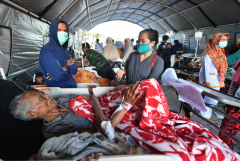 "We have never conducted proselytism — consciously or unconsciously — among quake victims. The claim going viral is a lie," the statement said.

"If there are people irresponsibly conducting proselytism, we would strongly condemn it and call on police to take a strict action against them. We don't want any action which could disentangle unity and harmony in this province."

Reverend Gomar Gultom, general secretary of the Communion of Churches in Indonesia, said the furor was likely a misunderstanding.

"There are certain groups who don't understand the real meaning of humanitarian aid. They carry religious symbols and local people see this as proselytizing," he told ucanews.com.

Indrayanto from the Yogyakarta-based Muhammadiyah Disaster Management Center said volunteers from religious-based organizations must look at how they go about humanitarian assistance.

In this case "the volunteers [in the video] might not have intended to conduct proselytism. But it becomes a problem if they fail to take into account cultural differences which can be interpreted negatively," he said.

According to him, the people in the video had apologized.

"We appreciate it. What they need to improve is how they offer humanitarian aid to victims," he said.