Local residents say 'no' to overdevelopment in Indonesia 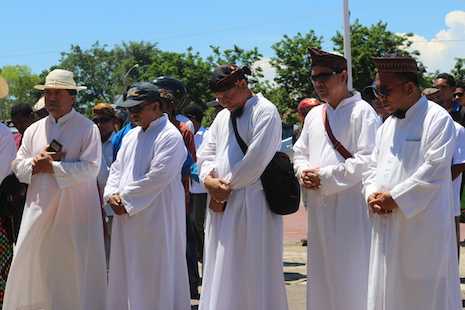 A number of priests and nuns from Ruteng Diocese joined about 1,000 protesters Dec. 5 in Labuan Bajo in the predominantly Catholic province of East Nusa Tenggara where they urged the local government to protect their ever-shrinking green space, instead of building more hotels.

At issue is a 4.2-hectare white-sand area of Pede Beach. The government recently granted a 25-year contract to an investment company that plans to construct hotels along the once-quiet seashore.

"Spiritual and physical happiness cannot be met only with dozens of millions of rupiah per year from the hotels," Father Martin Chen, director of the diocese's Pastoral Center, told protesters.

The local government must preserve the green space instead of letting the company manage it, he said. "Local people have the right to enjoy the green space. But their right will be gone if the hotels are built."

Father Chen said that the church had already expressed strong opposition to additional beachfront development earlier this year during a diocesan synod.

The synod issued a statement in January that said "we urge the governments of the province and of West Manggarai district to stop the privatization of Pede Beach for the sake of the planned construction of the hotels by investors."

Father Chen maintained that local people would need such a green space that could be accessed easily. "We need a model of development that prioritizes local people's interests, instead of the investors' interests," he said.

He also promised that the church is united with local activists and will support and participate in a future massive rally if local governments fail to acquiesce to their demands of protecting beachfronts from over-development.

Speaking with ucanews.com, Edward Angimoy, of the Sunspirit for Justice and Peace, which promotes products produced by indigenous communities, called the local governments' policy as "absurd."

"[They] see development only as a money maker. They stop at that point. They forget to think about local people's welfare, which includes the availability of open public space," he said.

Meanwhile, during his visit to Labuan Bajo on Oct. 29, Gov. Frans Lebu Raya said the planned construction of the hotels was aimed at improving the region's income.

"The local government's asset must be maximized in terms of its use so as to drive the local people's economic life," he said, as quoted by floresa.co.