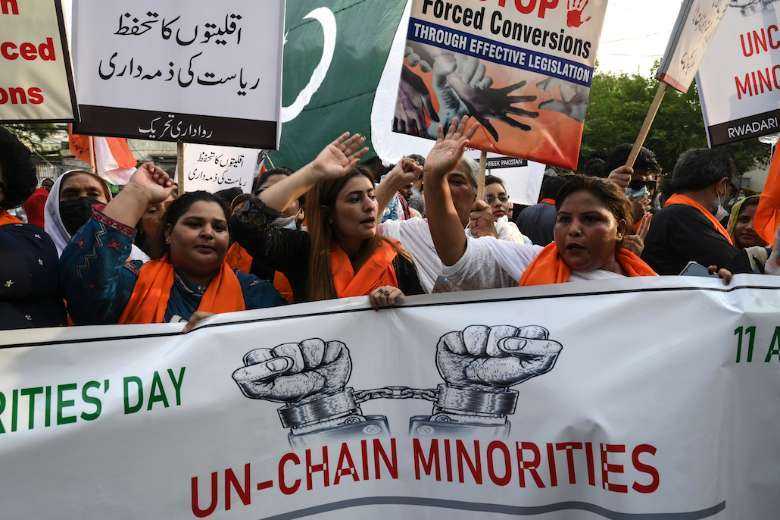 When Pakistan's President Arif Alvi celebrated Minorities Day recently at the President House in Islamabad, there were more boos than cheers.

“It is so sad that no one from the religious minorities was a speaker. It is better not to celebrate it when they cannot utter even a single word on this day,” Anjum James Paul, chairman of the Pakistan Minorities Teachers' Association, tweeted.

Khalid Shehzad, a Catholic activist, shared a similar Facebook post. “The ceremony ... has proved that the political and religious leadership of the Christian community has lost its meaning. Bishops or pastors were absent from the front row where three minority (Hindu) members of the National Assembly were seated,” said the Lahore-based member of the National Lobbying Delegation (NLD) for Minority Rights.

Their concerns were valid as Christians remained absent from the federal cabinet at the completion of three years of the Pakistan Tehreek-e-Insaf government led by Prime Minister Imran Khan. Despite passage of the Sindh Minorities’ Rights Commission Bill in 2016, there has been no such body in the southern province.

Other issues include the forced conversion of underage minority girls and the nationalization of Christian educational institutes. Last week a Catholic church was demolished following the government’s anti-encroachment drive near two narrow streams passing through Karachi, capital of Sindh province.

All this requires public relations campaigns and concerted efforts to advance the interests of the local Church and improve the quality of lives of her followers. However, the activities of the NLD itself were frozen on Aug. 17 when funding dried up.

The rights advocates are accused of seeking fame, defaming the country, getting foreign visas and pleasing outside forces

The delegation was one of the most prominent advocacy groups in Pakistan and had been working toward safeguarding the rights of religious minorities since 2012. Its success stories include implementation of education and job quotas for minorities as well as the Hindu Marriage Law.

Its 24 members included political leaders, activists, religious leaders, academics, journalists and social workers from all four provinces. The minority delegates comprised eight Hindus, one Sikh professor and 12 Christians who worked only on “doable minimum agendas.” They worked with policymakers, especially parliamentarians, bureaucrats and executives, to ensure the constitutional rights of citizens, especially minorities.

Ahmadis were deliberately left out to avoid any risk and threats. Ahmadis, who are among the most persecuted communities in Pakistan, were also excluded from the federal minority rights commission formed in May last year.

“A sudden lobby becomes active whenever a movement or a group takes up an issue, whether of bonded laborers, women or minority rights or against extremism no matter how legitimate it is. The rights advocates are accused of seeking fame, defaming the country, getting foreign visas and pleasing outside forces,” he said.

“These arguments leave the issues unresolved and unnoticed. The authorities instead focus on the actual mission of the rights defenders and urge them to highlight good things in the country.”

According to Peter Jacob, executive director of the Centre for Social Justice, the present system sits crippled. “It discourages development. Both minorities and human rights are attacked,” he said.

Minority members of the NLD are now challenged to sustain their mission. Some are trying to organize activities at a low profile. A few drafted farewell messages for the NLD on social media.

Sabir Michael, a Karachi-based NLD member, compared his mission to the Parable of the Unjust Judge. “We should be persistent like that widow and keep seeking justice. Sadly, we faced most opposition from Catholic priests on updating the Christian Divorce Act,” he told me.

The Church should support lobbying efforts for democracy and interfaith harmony. The peaceful struggle should go beyond interfaith commissions and indoor rallies (for media coverage). Lobbying can help pursue government systems without risking bishops being labeled political figures.

It should hire professional lobbyists to swing policies in their favor. It should support independent think tanks even if they are critical of systems with the local Church. It’s a better investment than financing periodicals that only report good news and coverage of confirmation and Eucharist ceremonies while struggling with subscriptions. Change can only come through an honest evaluation and acknowledgement of shortcomings.

Organizing streets protests is another democratic right and a strategy popular among Christian circles. However, it reduces the chances of basic criteria — namely, the dialogue with both establishment and social circles. Mutual interest is a key concept in international relations. The momentum should continue amid the shrinking space for diversity.

Members of the National Lobbying Delegation for Minorities with President Arif Alvi at Aiwan-e-Sadr in Islamabad on Feb. 7. (Photo: Khalid Shehzad)