'Living in a dark era': one year since Myanmar's coup

Almost 1,500 civilians have been killed and over 11,000 arrested in the military's ongoing crackdown 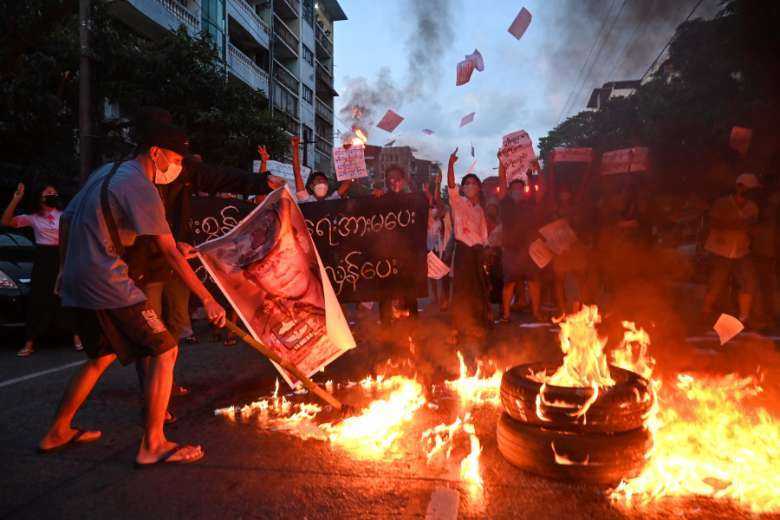 Protesters burn a picture of Myanmar's military chief Min Aung Hlaing during a demonstration against the military coup in Yangon on Nov. 10, 2021. (Photo: AFP)

Hours before Myanmar's new parliament was due to convene last February, troops rounded up lawmakers in dawn raids, ending a brief democratic interlude and setting the stage for months of bloodshed.

A year later the country's latest junta is struggling to contain the backlash unleashed by its power grab, with daily clashes and swathes of the country outside of its control.

Almost 1,500 civilians have been killed and over 11,000 arrested in its ongoing crackdown, according to a local monitor, with rights groups accusing junta troops of torture and extrajudicial killings.

But for a pro-democracy movement angered by the military's power grab, ending its decades-long entanglement in Myanmar politics once and for all is the only option.

That means, analysts say, there is no end in sight to the crisis that has devastated the economy, emptied schools and hospitals across the country and sent thousands fleeing to neighboring Thailand and India.

"We are still living in a dark era," said Htoo Aung — using a pseudonym for fear of reprisal — at a market in commercial hub Yangon.

"We have to think how we can struggle on through our daily lives under this military dictatorship rather than about our goals, our dreams in the future."

In Yangon and other cities, the junta is projecting a return to normality as traffic jams return and shopping malls slowly fill up again. But, days before the Feb. 1 anniversary, it is taking no chances.

Authorities recently announced that those honking car horns or banging pots and pans — popular protests in cities following the coup — could be charged with treason or under an anti-terror law.

But daily clashes between the dozens of people's defence forces (PDFs) that have sprung up across the country to fight back against the putsch show no sign of abating.

The ex-protesters and villagers that fill their ranks have dealt some painful blows to junta troops with guerrilla ambushes and mine attacks, even as they struggle to secure heavy weapons.

A shadow group of lawmakers claims almost 3,000 junta troops died in fighting with PDFs between June and November, while the junta says 168 soldiers and police were killed between February and late October.

The year of conflict has taken a toll on the military, which is facing morale and recruitment problems, said International Crisis Group's Myanmar senior adviser Richard Horsey.

"But these challenges are very unlikely to force the military to capitulate or lose its grip on state power," Horsey said.

Junta troops were blamed for a Christmas Eve massacre that left the charred remains of more than 30 people on a highway in the east of the country, including two staff members of the Save the Children charity.

Earlier in January it ordered air and artillery strikes on a state capital in the east to prevent anti-coup fights from seizing ground in the town.

Myanmar's myriad ethnic armed groups have largely held back from throwing their lot in with the democracy movement thanks to a longstanding mistrust of the majority Bamar elite, epitomized by Aung San Suu Kyi and her ousted National League for Democracy.

It is a trust deficit that a shadow National Unity Government dominated by lawmakers from her party, and which has widespread support, is trying to overcome.

Suu Kyi's closed-door trial in the military-built capital continues, and in the coming months she will likely be sentenced on a clutch of corruption charges — each of which carries a maximum 15-year jail term.

With the generals shielded at the United Nations by China and Russia — and the crisis jostling for attention with wars in Ethiopia, Yemen and Ukraine — many in Myanmar have given up on help arriving from the international community.

The generals have promised a return to multiparty democracy and fresh elections by 2023.

But "it is impossible to see how they could do so given their tenuous control of much of the country," said the Crisis Group's Horsey. It seems "very unlikely that either side will be able to deliver a knockout blow," he said. "The stage is set for months, possibly years of violent confrontation."