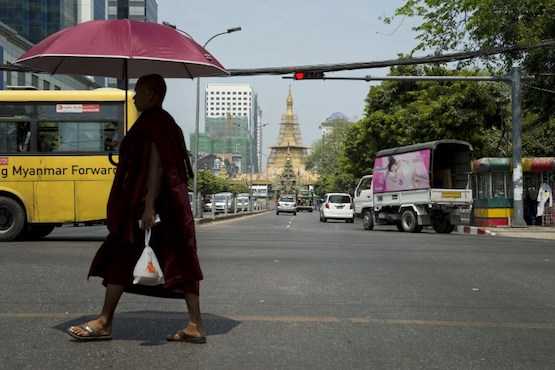 A Buddhist monk crosses the street across Sule pagoda, seen in the background, in central Yangon in this file image taken March 9, 2016. (Photo by Romeo Gacad/AFP)

While thousands of Rohingya have fled from violence and the fastest growing refugee crisis in the world is unfolding in Rakhine, another story is happening in other parts of Myanmar with no sympathy on the plight of Rohingya among the general population amid rising nationalism and anti-Muslim sentiment.

The Rohingya tragedy looks to be a boon for hard-line Buddhist groups to gain support from the people through their negative portrayal of the Muslim group in western Myanmar.

Hard-line monks group Ma Ba Tha, also then known as the "Committee for the Protection of Race and Religion," spearheaded much of the anti-Muslim rhetoric, which has fueled sectarian conflict in the country, particularly in western Rakhine State. Violence there in 2012 left more than 200 people dead and forced tens of thousands — mostly Rohingya Muslims — to flee their homes.

Banned by the government in May, the Ma Ba Tha has now rebranded its name as "the Buddha Dhamma Philanthropic Foundation" following the state Sangha's order on taking down its posters and signboards across the country.

The group's leader, Mandalay-based Wirathu has for half a decade been preaching a brand of extreme Buddhist nationalism and anti-Muslim rhetoric that is now a growing force in Myanmar society where the Buddhist majority treats monks with high regard.

In the past, Wirathu has helped fueled communal riots that erupted across the country from 2013 to 2014.

Wirathu has been barred from giving sermons for one year effective from March due to his hate speech but he continues to post anti-Rohingya sentiment and rhetoric against Muslims on his Facebook page.

Furthermore, he visited to a conflict-torn northern Rakhine State in mid-October and gave donations to the people while local police accompanied him for security.

"The Bengali (the name many people in Myanmar call the Rohingya) have a policy to take the land with their rapid growth population," Wirathu posted on Facebook page on Oct. 31.

The monk, who was imprisoned in 2003 for inciting anti-Muslim sentiment, was influential in lobbying for a raft of so-called race and religion laws that were passed by a military-backed government before the 2015 election. Hard-line Buddhist monk Wirathu speaks during a meeting following the decision of the State Sanhga Committee to abolish their group — the ultra-nationalist Ma Ba Tha — in Yangon on May 27. (Photo by Ye Aung Thu/AFP)

Ma Ba Tha was a strong supporter of the previous military-backed regime under President Thein Sein whose political party, the Union Solidity and the Union Solidarity and Development Party, was trounced in the 2015 elections by Aung San Suu Kyi's National League for Democracy (NLD).

Across the country, the group has 185 branches and it has an estimated 10 million supporters.

Many of them, as Wirathu does, voice their opinions via social media.

Aung Htay, a Rakhine Buddhist who frequently organizes anti-Rohingya rallies in the Rakhine capital Sittwe, said there is a mix of information on Facebook and some is good while some is abusive

"I think it is up to the viewer on how the consider information shared on social media. If it is hate speech, that often depends on the viewer," Aung Htay told ucanews.com.

Asked by whether he believed Wirathu's post on Facebook, he claimed that the monk posted about the situation in Rakhine State only after he got information on the  ground "so it is true news."

Maung Thway Chun, a Yangon-based Buddhist and the editor in chief of a weekly magazine run by the hard-line Buddhist group, said people were using social media to express their opinions on what is occurring in Rakhine.

"People are sharing their ideas and views on social media so I don't think it is hate speech," Thway Chun told ucanews.com.

The violence in Rakhine State since Aug. 25 is a challenge for Suu Kyi's government's effort to confront growing Buddhist nationalism.

Suu Kyi has been under fire over her silence on the plight of Rohingya and at the same time, hard-line Buddhists have been wary of her handling on Rakhine crisis, claiming that she is weak and has not taken strong decision against Muslims.

To avoid a populist backlash, her NLD party didn't field any Muslim candidates in the 2015 election where it won a landslide victory.

The NLD now dominates upper and lower houses of national parliament, however, it is a Muslim-free parliament despite there being about a million Muslims in Myanmar in addition to the 1.1 million Rohingya before the exodus.

While international pressure amounts on Suu Kyi's government, the Myanmar military still has the upper hand in handling on the Rakhine crisis. They have claimed that Rohingya militants tried to take their own territory in Rakhine so they must protect the sovereignty of the country.

Myanmar State Counselor Aung San Suu Kyi walks from a military helicopter after arriving at Sittwe airport on Nov. 2, following a visit to Maungdaw in Myanmar's conflict-battered northern Rakhine State. It was an unannounced trip to an area that has seen most of its Rohingya Muslim population forced out by an army campaign. (Photo by Khine Htoo Mratt/AFP)

Under the banner of nationalism, Islamophobia, sovereignty, the military and hard-line Buddhist groups appear to have the same boat to attract public attention.

Muslims have been targeted and used as a political tool under the military regime that ruled the country for more than five decades. The military are now acting as a savior of the nation by justifying the violence in Rakhine.

In a rare move of support for the once feared and hated institution, nationalists organized the rally in Yangon recently in support of the military over the Rohingya crisis.

Wirathu sent a speech to the rally that posted he also his Facebook page. In it, he said Myanmar is under threat from Jihadis and Islamization. He wrote that the military is protecting the country's sovereignty.

"Only when the military is strengthened will the country be secure so I urge the people to support and help the military," Wirathu said.

Maung Thway Chun, the editor of the hard-line Buddhist weekly, said he supported the military. It is a strong institution defending the country's sovereignty, he said.

"Due to the military, Rakhine State is now stable and back to normalcy. It is not due to the effort of Aung San Suu Ky's government," Thway Chun told ucanews.com.

He strongly criticized the United Nations and the Western countries over their human rights abuse claims which he said where "untrue." There is "no ethnic cleaning" in Myanmar, he said.

Pe Than, a lower house lawmaker for hard-line Buddhist party-the Arakan National in Rakhine, said Myanmar people should rally both in support of the military and Suu Kyi's government to oppose pressure from the international community.