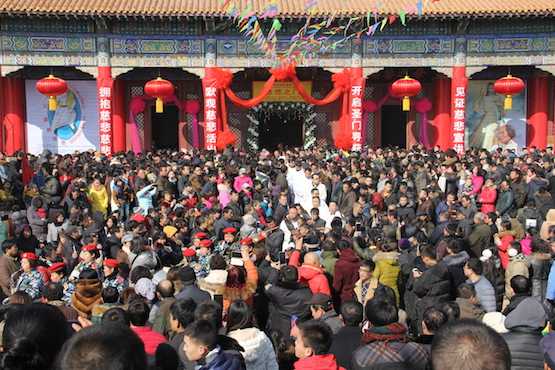 Taiyuan Diocese in Shanxi province celebrates the opening of Holy Door for the Year of Mercy. (Photo supplied)

As both parties seek an accord regarding the ordination of bishops, the cardinal spoke of the significance of the diplomatic efforts and rebuffed those who criticized the negotiations or mistrusted the Holy See.

Professor Wang Meixiu, an expert on Catholic studies at the Chinese Academy of Social Sciences, thinks the article "speaks partly to the church and partly to government officials, hoping they will understand the Catholic Church."

Since 1957 the Catholic Church in China has been split into underground and open communities, with the latter being known as the Chinese Catholic Patriotic Association (CCPA) and having direct ties to Beijing.

Father Anthony Wang, an open priest in central Shanxi province, believes the pope will not disregard the interests of the underground church, nor sign an agreement that ignores church principles. "If so, an accord could have been reached a long time ago," he said.

An underground parishioner in northern Xuanhua Diocese, identifying himself as 'Thomas,' said he would obey Pope Francis' decision, believing the pope has a comprehensive view of China and recognizing Beijing-appointed bishops was part of this.

"But I would observe how these bishops behave. If they are still engaged in the CCPA and doing things that betray the church, it wouldn't matter if they are recognized by the pope or not. I wouldn't participate in their sacraments. This is a matter of conscience," Thomas said.

Many Catholics in both the underground and open communities do not believe an accord would improve the situation for the Church in China, but fear things will get worse.

"An accord is useful only when the partner bears goodwill. Without the Chinese government changing its principles, it [the accord] will just be a piece of paper," said Father Joseph of Shandong.

Father Peter, an open priest in Hebei province, believes, "that once an accord is signed, it essentially cedes the authority of appointing bishops to the Communist Party."

By then, illicit bishops who received pardon from the Vatican will "continue to be a puppet under the control of the government" while underground bishops will be forced to join the CCPA, he said.

Catholic blogger Bao Lu sees Chinese government's self-interest behind the negotiations. "China is willing to negotiate because it wants the Vatican to sever diplomatic relations with Taiwan. It's not the first time the Chinese government has played such tricks," he told ucanews.com.

Cardinal Tong's article went viral on social media, polarizing readers. One commenter with the handle 'Yushan Qingyao' wrote,"No matter if you belong to the underground or open church, [you] are eligible to question: are we being betrayed by the negotiations?"